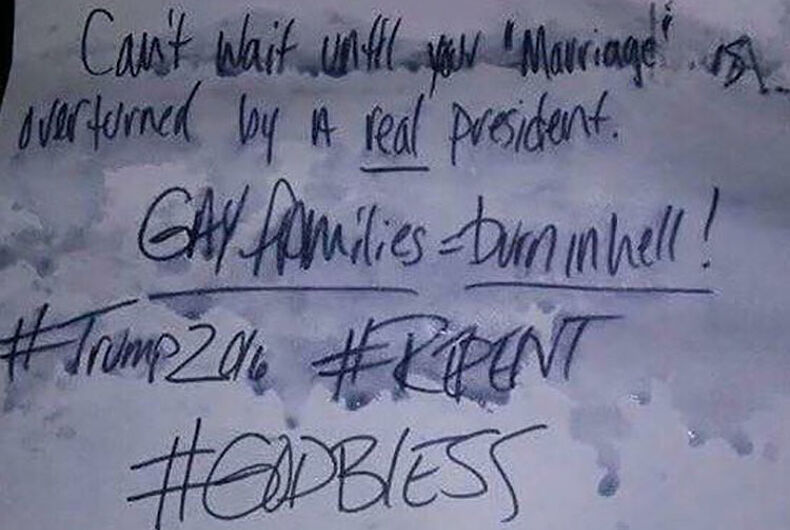 The evidence is mounting: homophobes, racists and anti-semites, apparently emboldened by the election of Donald Trump — whose victory this week was attributed to the “silent majority” — are silent no more.

Shaun King, the senior justice writer at the New York Daily News, has been sharing that evidence, and people have been sharing more with him. Another collection of hate messages on Twitter has been shared tens of thousands of times.

This was left on a car windshield in North Carolina. The vehicle’s owner is gay.

And then there was this from Florida:

This from my friend Nichole… pic.twitter.com/ydMKEcY60z

Not everyone is getting away with such horrid behavior:

This is from Connecticut:

And even the deaf are not immune from the hatred now brazenly displayed:

"This is white America now. Take your retarded self and go somewhere else now," towards American Sign Language (ASL) user#TheTrumpEffect 😔 pic.twitter.com/HAWNzPfTDo

Most of the hate seems directed at members of minority races:

Election Day fell on the anniversary of Kristallnacht — when Nazis raided Jewish neighborhoods in 1939 — so perhaps it’s not surprising to find Jews are still targets of hate:

This happened to me this morning after I responded to Nazi propaganda in Philly. This is Trumps vision of making america great again #ACLU pic.twitter.com/QCryNBPqQd