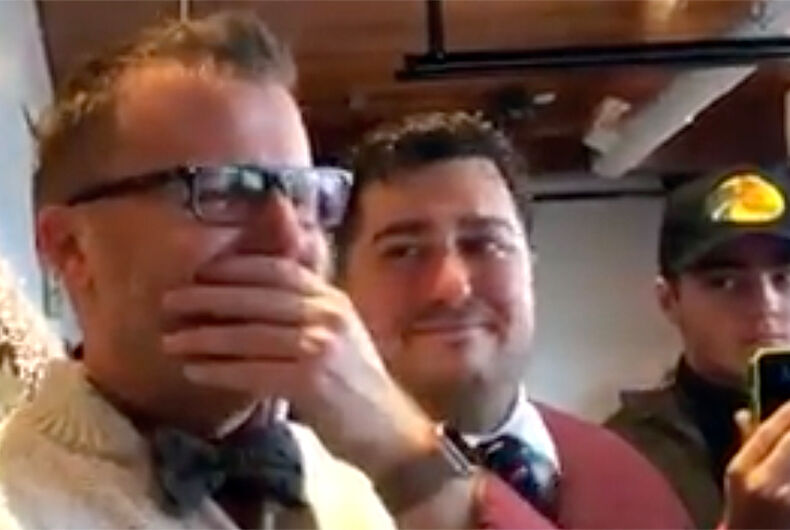 Christopher Landis is a well-loved choir director at Hingham Middle School, and his students proved that in a big way while Landis was at his wedding rehearsal with his fiancé, Joe Michienzie.

The parents of two of his students, Margit Foley and Joy Foraste, got wind of the festivities and began organizing back in September of last year, first reaching out to Landis’ fiancé.

“We reached out to his fiancé, Joe, because I wasn’t really sure how he’d react,” Foley told the Patriot Ledger. “But he was immediately on board. He said he had also been trying to figure out how to incorporate the students because they mean so much to Mr. Landis.”

After they got Michienzie’s blessing, they reached out to the venue and other parents. They expected to get 20 or so responses out of the 60 students’ families they contacted, but the response was far greater.

Related: He came out to 1500 people at his Catholic school’s assembly. The reaction was priceless.

“We had no idea what to expect,” said Foley. “But instead of the 20 we were hoping for, we had over 50 kids. It’s such a testament to Mr. Landis as a teacher and as a figure in their lives.”

The students met over four Sunday afternoons for practice, keeping the surprise from their choir teacher, and left school early to attend the rehearsal. The students were bussed by another parent roughly 30 miles to reach the event.

As they filed in, Landis can be seen tearing up, surprised and deeply touched to see his students. The students then broken into “All You Need Is Love” by The Beatles.

At the end of the performance, Landis rushed over to the students, looking at his watch. “You’re supposed to be in school,” he exclaimed, broadly grinning, before telling those in attendance “These are my kids.”

The video of the class’s escapade is available via the Hingham Public School’s Facebook page, showing not only the support of the students and parents, but of the school itself.

“It’s great that this is the type of community we get to work in,” said Hingham Middle School Principal Derek Smith. “It says so much about the kids and their parents, but also about the type of teacher Mr. Landis is, that he would inspire something like this — it was excellent.”

Foraste agreed, saying “It was so wonderful for the kids to see him with his family and his close friends, and they saw him as a person, not just their teacher. They saw how much it meant to him. He immediately started crying and the kids started crying. It’s something they’ll never forget.”

View the video below:

The Hingham Middle School Junior Choral Spectrum surprised their teacher, Mr. Christopher Landis, at his wedding rehearsal brunch just a few week ago. Our students practiced every Sunday for a month to get ready for the surprise. Thanks to HMS parents Joy Foraste and Margit Foley for organizing this touching moment. Congratulations to Christopher and Joe on their wedding! All of us here at HPS wish you nothing but happiness!!

Florida’s secretary of state was caught in blackface drag. He just resigned.