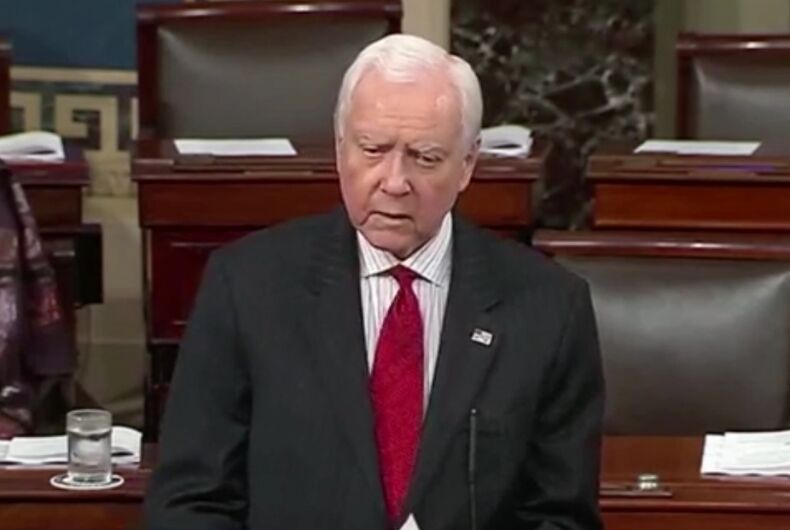 Hatch, an ultra-conservative who has been in the U.S. Senate since 1977, announced his retirement earlier this year.

On Wednesday, he spoke before the Senate and admonished his colleagues to seek a compromise on LGBTQ equality:

Nowhere is the pluralist approach more needed than in the fraught relationship between religious liberty and LGBTQ rights….

Religious liberty is a fundamental freedom. It deserve the very highest protection our country can provide.

At the same time, it’s also important to account of other interests as well — especially those of our LGBTQ brothers and sisters. Pluralism shows us a better way. It shows us that protecting religious liberty and preserving the rights of LGBTQ individuals are not mutually exclusive.

I believe we can find substantial common ground on these issues that will enable us to both safeguard the ability of religious individuals to live their faith and protect LGBTQ individuals from invidious discrimination.

He referred to the so-called “Utah compromise,” a law passed in Utah that got the support of Mormon leaders while adding sexual orientation and gender identity to anti-discrimination legislation.

The bill achieved this by banning discrimination against LGBTQ people in employment and housing, but creating religious exemptions for religion-adjacent employers like non-profit organizations and schools associated with a religion.

HRC praised the legislation at the time and called it the “first time that a Republican-controlled process has led to extension of protections for LGBT people.”

Even a compromised anti-discrimination bill is better than none at all. And this is Utah.

Hatch advocated a federal version of the bill in his speech, as a template for a nationwide compromise that could protect LGBTQ people without drawing the ire of Christian conservatives, a way to get around how the religious right is using “religious exemptions” to nullify anti-discrimination laws in courts by clearly delineating those exemptions in legislation.

There are several problems with this approach.

First, the Utah compromise only worked because the particularly fraught issue of public accommodations discrimination was ignored. Whether a hotel owner is allowed to discriminate against same-sex couples or whether a baker has to sell a wedding cake to a gay couple if they sell the same cake to straight couples is where most of the fight in the courts is happening.

Second, while the Mormon Church gave support to the Utah compromise, white evangelicals probably wouldn’t. The Southern Baptist Convention spoke out against it in 2015.

“Christians and other religious people working in the marketplace are not really addressed in terms of their freedom of conscience,” said Roger Moore, president of the Ethics and Religious Liberty Commission of the Southern Baptist Convention. “I don’t think this will be a model.”

Last, as much as politicians and the political media love the idea of a grand compromise, they don’t exist in reality because there is no reason for them to exist.

That all said, it is striking that Hatch would have anything nice to say about LGBTQ people at all. Hatch has consistently scored poorly on HRC’s Congressional Scorecard, getting a zero for the past two years.

But anti-discrimination legislation is something he has shown that he can get behind. In 2013, he denounced marriage equality as “undermining the very basis of marital law,” but he also voted for the Employment Non-Discrimination Act (ENDA).

And earlier this year, he delivered a Pride Month address that focused on LGBTQ youth suicide.

Mitt Romney will take Hatch’s seat in the Senate next month.