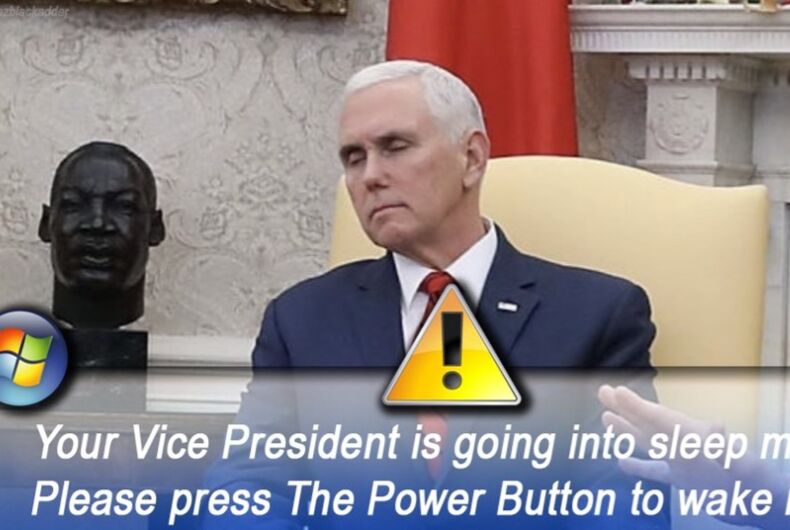 Yesterday’s squabble on live television between President Donald Trump and Democratic leaders Nancy Pelosi and Chuck Schumer was one for the ages.

After all, Pelosi did the one thing Republicans never do. She stood up to him in public to his face. And in the process, she became an even bigger hero in the eyes of progressives.

You probably didn’t notice, but Vice President Mike Pence was also in the room. The internet and late night comics, however, did. And faster than you can say “beige,” they were on it.

From Elf on the Shelf references to comparisons to Weekend at Bernie’s, the new Pence statue in the Oval Office was ripe for roasting.

On #LSSC tonight: Step inside the mind of Mike Pence. pic.twitter.com/s1AsBkagVB

Mother isn’t here. I must keep my eyes closed and pretend I don’t see the lady person. #MikePence pic.twitter.com/RprfeuDk9w

mike pence has perfected the art of stillness so apex predators won’t spot him pic.twitter.com/CP5GyViqgB

Prior to this meeting, Madame Tussaud’s rolled in this Mike Pence wax figure. pic.twitter.com/frH4FEG49U

I can’t stop watching this video of today’s Oval Office meeting—it zooms in to Pence with the Curb Your Enthusiasm theme song playing in the background. pic.twitter.com/mU2F2O7zkf