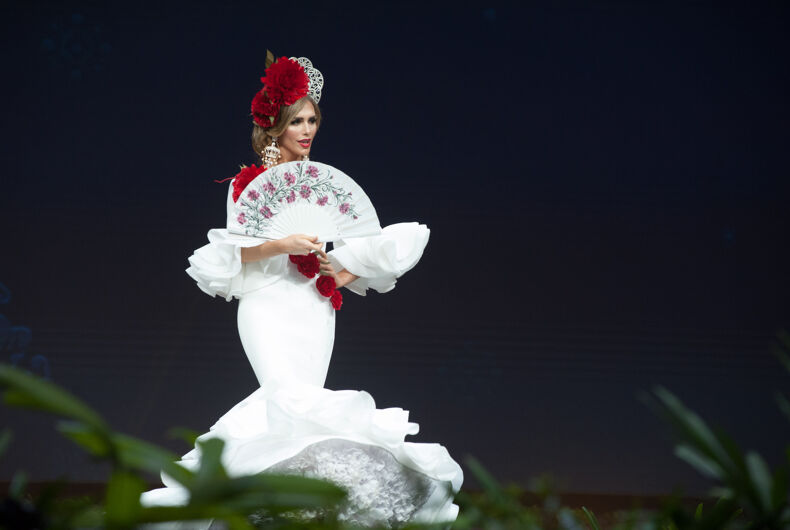 Angela Ponce, Miss Spain 2018 on stage during the National Costume Show, an international tradition where contestants display an authentic costume of choice that best represents the culture of their home country, on December 10th at Nongnooch Pattaya International Convention Exhibition (NICE). The Miss Universe contestants are touring, filming, rehearsing and preparing to compete for the Miss Universe crown in Bangkok, Thailand. Tune in to the FOX telecast at 7:00 PM ET live/PT tape-delayed on Sunday, December 16, 2018 from the IMPACT Arena in Bangkok, Thailand to see who will become the next Miss Universe. Photo: HO/The Miss Universe Organization

Angela Ponce, a transgender woman, will be taking the stage December 16 as part of the Miss Universe competition. The competition is being held in Bangkok this year.

She won the right to compete this year after winning Miss Spain, making her the first transgender woman to make it to Miss Universe 2018 where she will compete against other women from 94 countries and territories. For Ponce, the experience is very exciting and new to her.

“I’m very excited to participate in Miss Universe. I feel like I am living a unique experience, she told LGBTQ Nation. “I’m happy to be representing my country.”

“I hope people think that any dream is possible, when they see me in the competition,” added Ponce. “It is possible to live our dreams.”

While reports vary, many who bet on the event are favoring Pence’s chances at taking home a tiara from the event, a fact that Ponce takes in stride, attributing her standing as the result of the hard work she has put into her run.

“That makes me very happy, that the people who see my progress in the competition see that I am a possible candidate, as I have worked hard on this for a long time,” said Ponce.

While Ponce is the first transgender woman to compete at this level of the event, she is not the first known transgender person ever in the overall competition: that honor goes to Jenna Talackova, a Canadian model and personality, who fought to be a part of Miss Universe Canada in 2012.

Ponce told us how much Talackova aided her own bid, saying that she, “fought to compete, and I’m very grateful for her, because she laid the groundwork that allowed me to compete. She made it possible that I could be here and find this is a lot easier.”

“I’m very excited that I have not run into any obstacles, and all my competitors have accepted me very nicely. I feel like I’m being treated like anybody else — and to be here is marvelous.”

At the time of Talackova’s run, Donald Trump, now the President, owned the Miss Universe pageant and initially did not allow transgender contestants. This, coupled with his administration’s pushback on transgender rights, is on the mind of Ponce.

Still, she looks as this as more of a win for human rights than a message to Trump, and views her run as a way to break new ground for transgender women.

“Me being here and being accepted shows the rest of the world that I’m like any other girl,” Ponce told LGBTQ Nation. “I think that I can open a lot of minds and eliminate a lot of prejudice: prejudice that is not founded in reality.”

“I would tell them that they should enjoy the participation in the pageant to the maximum, because it is something you only get one opportunity to do in your life,” said Ponce.

“That they shouldn’t be afraid to face and fight for what they want, because we can realize our dreams here or in any other aspect of our lives.”

She also felt it key to speak directly about the importance of rights for trans youth and the care they need to flourish.

“My main message would be one’s right to their identity before turning 18 years old,” said Ponce. “The children should have the right to use whichever bathroom they identify with, and they should be supported by education in grade schools, because this could benefit everybody in the future.”

This will be the 67th year for the Miss Universe event, and the third time that Thailand will host the event.

Pelosi may have embarrassed Trump, but Pence is the one everyone’s laughing about