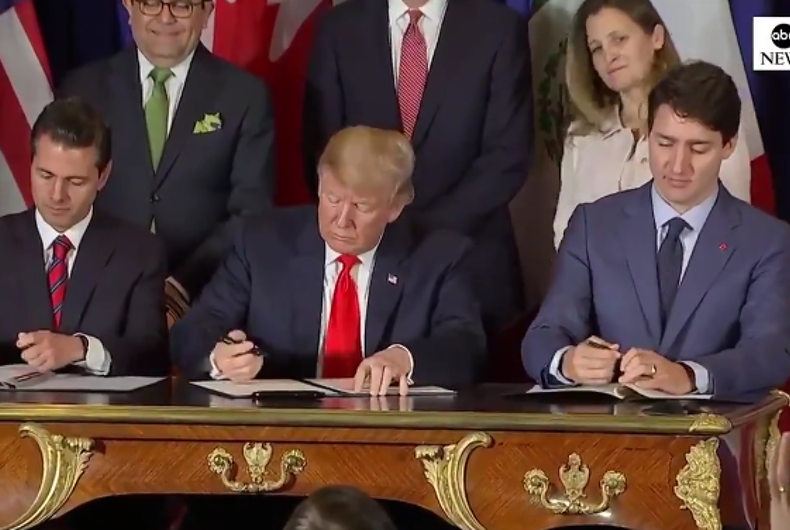 A North America trade agreement’s LGBTQ provisions have been rendered meaningless – by a footnote.

The United States–Mexico–Canada Agreement (USMCA) – the trade deal meant to replace NAFTA – includes a paragraph protecting LGBTQ people from discrimination in the workplace. It says that the countries will “implement policies that protect workers against employment discrimination on the basis of sex, including with regard to […] sexual orientation, gender identity.”

Canada worked to get that provision in the deal, but Republicans in Congress denounced it as “insulting to our sovereignty.”

Related: House Republicans are willing to blow up a new trade agreement over LGBTQ rights

Now a footnote has been added to the deal that effectively nullifies the provision. The footnote says:

The federal government does not ban discrimination on the basis of sexual orientation or gender identity in the private sector, so this footnote effectively says that doing nothing to protect the majority of workers is sufficient to meet the treaty’s requirements.

Geoffrey Gertz of the Brookings Institute tweeted that the footnote is “ridiculous.”

“And it’s the kind of thing that will make progressives even more suspicious of engaging with trade liberalization,” he wrote.

Honestly, whatever you think of the LGBTQ provisions in the new NAFTA, this outcome – to include them but nullify them with a footnote – is ridiculous. And it's the kind of thing that will make progressives even more suspicious of engaging with trade liberalization (ht:@snlester) https://t.co/6dY6ZezgAE

The leaders of the three member states signed the USMCA this past Friday. It goes into effect when after country has passed the necessary legislation to ratify it.