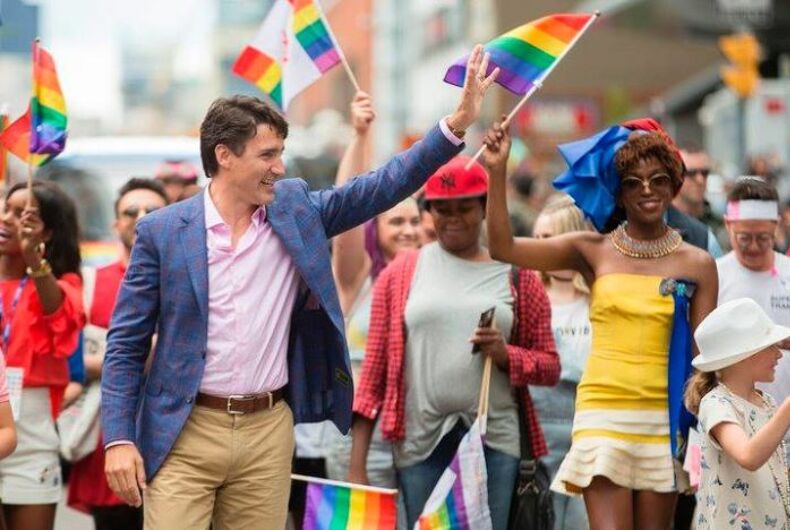 Canadian Prime Minister Justin Trudeau with trans activist Biko Beauttah at Pride Toronto. Canada was key in getting language about sex discrimination into the treaty.Photo: Facebook/@bikofans

Canada, the United States, and Mexico formally agreed to the text earlier this month, although it has not yet received final ratification and implementation by the member states.

Parties recognize the goal of eliminating sex-based discrimination in employment and occupation, and support the goal of promoting equality of women in the workplace. Accordingly, each Party shall implement policies that protect workers against employment discrimination on the basis of sex, including with regard to pregnancy, sexual harassment, sexual orientation, gender identity, and caregiving responsibilities, provide job-protected leave for birth or adoption of a child and care of family members, and protect against wage discrimination.

If the paragraph survives final ratification, then it would be a major win for Canada, which pushed for the provision.

US trade officials, though, have chosen not to highlight the provision and, in a brief statement this week, said that it will have no effect on the US.

“The draft provision would require no changes to U.S. law,” said a spokesperson for the Office of the U.S. Trade Representative.

The member states can ratify the treaty after the 60-day review period is over at the end of November. Mexico and Canada are expected to approve it, but it is still unknown whether a lame duck session of Congress or a new Congress will be willing to ratify the treaty.

Kim Davis on the campaign trail: ‘I did not treat anybody unfairly’