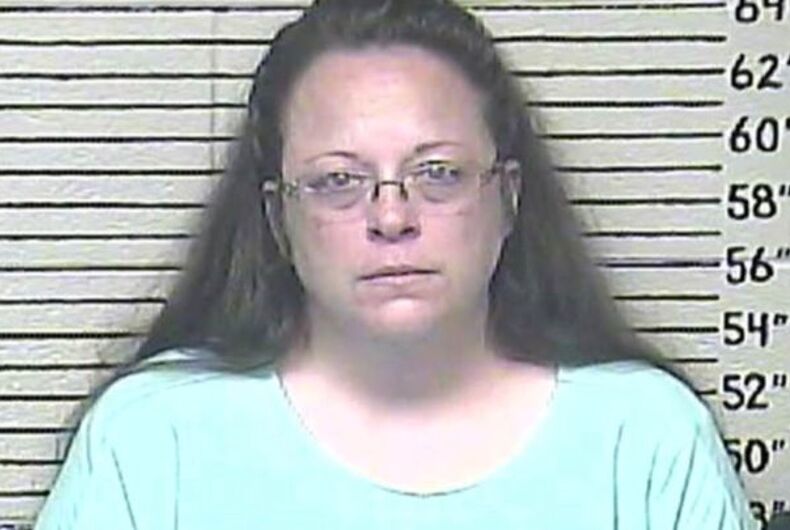 Rowan County Clerk Kim Davis, who got national attention in 2015 for refusing to issue marriage licenses after the Obergefell Supreme Court decision, is up for reelection, and she is defending her homophobia on the campaign trail.

Shortly after the Supreme Court ruled bans on same-sex marriage unconstitutional in 2015, Davis was caught on video denying a marriage license to David Ermold and David Moore.

She announced that her policy was to stop issuing marriage licenses altogether because she was “asked to violate a central teaching of Scripture and of Jesus Himself regarding marriage.”

A judge ordered her to issue marriage licenses and sent her to jail for five days for contempt of court when she refused.

At a candidate forum on Tuesday, Davis said, “I did not treat anybody unfairly.” She said that she refused marriage licenses to everyone, not just same-sex couples.

“I took an oath to stand up and uphold our Kentucky constitution and federal constitution, that’s exactly what I did,” she said, referring to when she refused to respect same-sex couple’s constitutional rights to equal protection and due process.

She said that Kentucky law defines marriage as a contract between one man and one woman.

“That’s not my choice. I didn’t vote [marriage equality] in,” he said. “But I have to go by the law. You have to issue what the law tells you do.”

In 2014, Davis won the election for County Clerk as a Democrat. She has since changed her party affiliation, saying that the Democratic Party “abandoned her.”