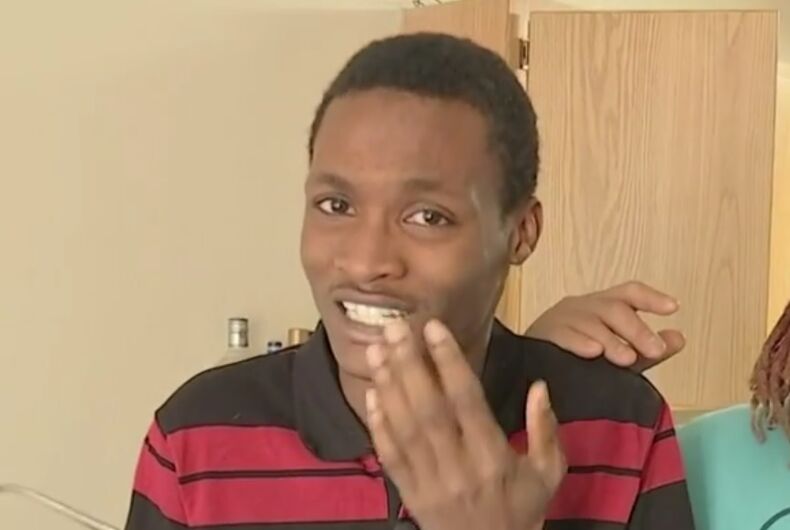 A gay couple was savagely beaten and stabbed on the porch of their home as neighbors stood by and watched.

Charles Clements picked up his boyfriend, Vincent, from work on Thursday. Vincent’s last name was not reported.

One of Vincent’s coworkers and another person followed them to their apartment in Las Vegas. They were attacked by the two men when they got home.

“I was about to unlock the door, the next thing I hear, he’s calling my name,” Clements told FOX5. “I come back, I see my boyfriend fighting with the guy.”

A glass table was knocked over in the fight, and Clements said one of the attackers picked up a shard of glass and stabbed Vincent in the back.

Related: A teen is accused of beating & locking up a gay man for 4 days in a brutal hate crime

“He picked up the glass,” Clements said. “I was like, ‘Don’t do that.’ And he started stabbing my boyfriend in the back. The guy was kicking him in his ribs.”

Clements was left with cuts and an injury to the head, and Vincent had two broken ribs and a punctured lung. Both had to go the the hospital for treatment.

Clements said that neighbors didn’t even call the police.

“Neighbors, everybody just looking,” he said. “Nobody called the police.”

“It was all about gay bashing,” he said. “The guy came up to my boyfriend’s job, calling him an abomination, calling him fag.”

Police are still looking for the attackers, and Clements said that he’s looking for a new home.

“I don’t want to be in this apartment no more because I’m afraid they’re going to come back,” he said.

Trump’s latest con is that he just protected LGBTQ rights. He didn’t.