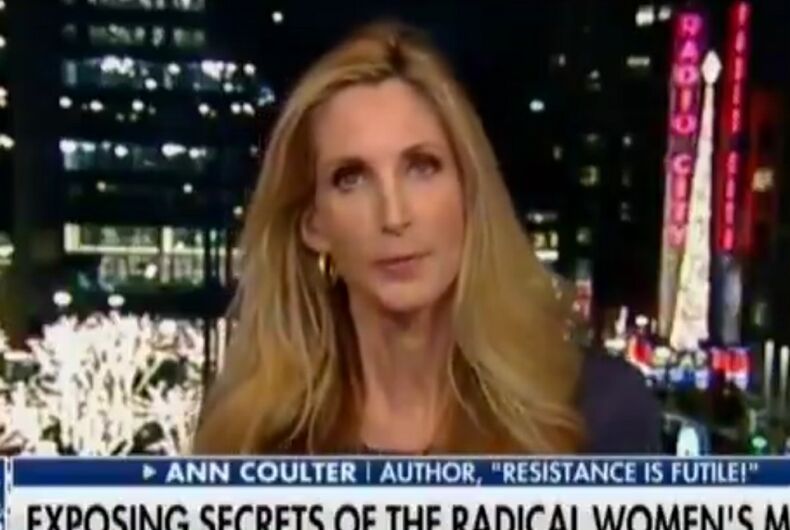 Ann Coulter appeared on Fox News’s The Ingraham Angle and said that the Democratic Party is going to fall apart because “They all hate one another.”

“I mean you, have the Muslims and the Jews and the various exotic sexual groups and the Black church ladies with the college queers,” Coulter said.

“The only thing that keeps the Democratic base together is for them to keep focusing on: ‘No, white men are the ones keeping you down, you must hate white men.’ It’s the only thing they all have in common.”

"I mean you have the Muslims and the Jews and the various exotic sexual groups and the black church ladies with the college queers … you must hate white men. It's the one thing they have in common" pic.twitter.com/xGWe0wH2uP

Related: Lesbian former mayor of Houston has hilarious response to Ann Coulter’s tweet about her

So, naturally, the left coalition will attract people who have less wealth and power than others and it will be more diverse.

But this isn’t the same thing has hating white men – that framing ignores the real problems people who aren’t white men (and even many white men) face and paints them as irrational.

And it’s also a way to call all those groups stupid – they only think that they are oppressed because the Democratic Party told them they are, if they were smarter they would realize that they aren’t!

Which is exactly the kind of prejudice that oppressed people are working against in the first place.