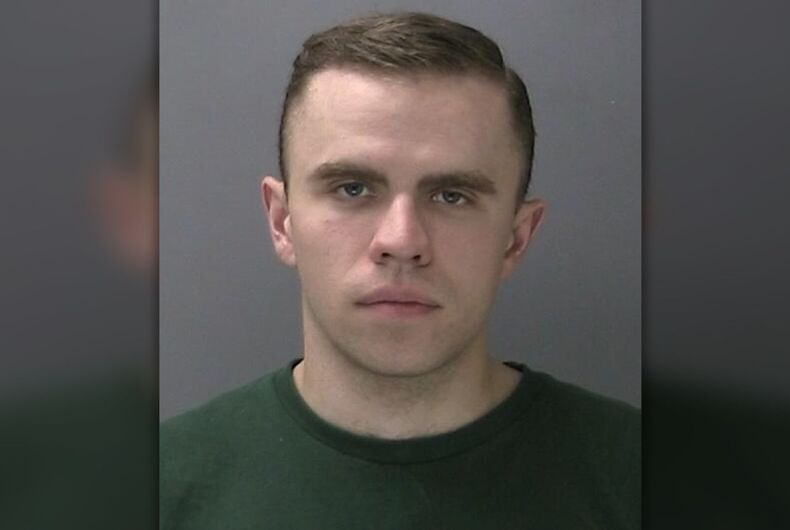 A man who allegedly stole a rainbow flag from a church in New York is now facing hate crimes charges.

Police believe that Ronald Witt, 21, is behind the repeated theft of a rainbow flag in front of Sayville Congregational United Church of Christ in Long Island.

The first time it happened was this past July.

“At first I thought it had just been blown off or maybe somebody was messing with it, but then it started happening on a regular basis,” Pastor Ray Banguolo said. “Two weeks later, it happened again.”

Related: Thief steals church’s rainbow flag, replaces it with a different one

He reported the theft the second time, and he posted a sign outside the church that said:

You destroyed our welcoming Rainbow Flag twice. It WAS an act of fear. It IS an act of hate. Do you realize that? IT WAS NOT KIND. IT IS HURTFUL. Instead of doing it again, talk with us. We will talk with you. You, too, are welcome here.

It happened again in September, three times in October, and then this past week.

After the fourth theft, the Suffolk County police Hate Crime Unit set up a camera. This past Tuesday, Witt was arrested.

“I’m happy they found out who he is and that it can stop because it was unnerving,” Bagnuolo said.

“These types of things are meant often to send a message. Sometimes there just a dumb thing that people do, but repeated over and over it begins to feel like there’s a targeting going on here and there’s a message.”

Even though his lawyer says that it was nothing more than a prank, Witt told police that he “didn’t want to see a gay flag on a church,” according to prosecutors.

He also left an American flag and a POW flag once when he stole the rainbow flag.

Witt is being charged with theft as a hate crime.