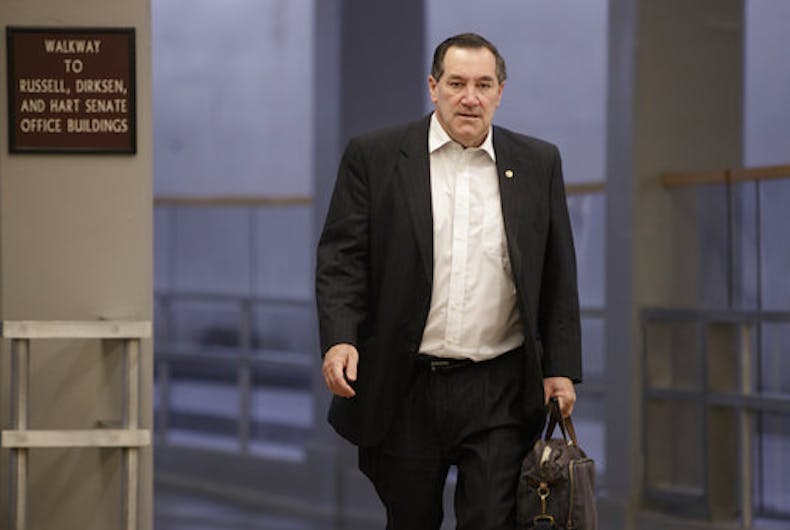 FILE - In this Friday, Feb. 3, 2017, file photo, Sen. Joe Donnelly, D-Ind., arrives early on Capitol Hill in Washington. Donnelly says he'll support the nomination of Judge Neil Gorsuch to the U.S. Supreme Court. The Indiana Democrat announced his support on Sunday, April 2, 2017, for President Donald Trump’s pick, calling Gorsuch "a qualified jurist who will base his decisions on his understanding of the law and is well-respected among his peers." Donnelly faces a tough re-election in 2018.Photo: (AP Photo/J. Scott Applewhite, File)

Indiana Senator Joe Donnelly has lost his reelection race after doing everything he could to irritate his Democratic base. Donnelly tried to portray himself as a moderate to appeal to the state’s Republican voters.

Donnelly, who only won the last election in 2012 after his previous challenger’s campaign imploded, regularly tried to distance himself from the national party. The race was listed as one of the best opportunities for Republicans to pick up a seat in the Senate.

Donnelly’s voting record is mixed. The moderate Democrat voted in favor of Neil Gorsuch’s nomination to the Supreme Court, but not Brett Kavanaugh. He was also one of a handful of Democrats who voted in favor of confirming the notoriously anti-LGBTQ judge Joan Larsen to the U.S. Court of Appeals for the 6th Circuit.

Hoosier progressives have complained about Donnelly since his election, but concede that he’s still better than a Republican who would actively work against traditional Democrat causes like health care or civil rights.

Last month, Donnelly ran an ad boasting how he split with his party to vote for President Trump’s border wall and complaining about the “liberal left” trying to cut defense spending. The ad shows a flannel-clad Donnelly chopping wood, in an almost shot-for-shot copy of a parody political ad from HBO’s Veep.

The Senator ran for office opposed to marriage equality, but announced his change of heart during a flurry of other Democrats announcing their support for same-sex marriage in 2013.

“I have been thinking about my past positions and votes,” he said at the time. “In doing so, I have concluded that the right thing to do is to support marriage equality for all.”