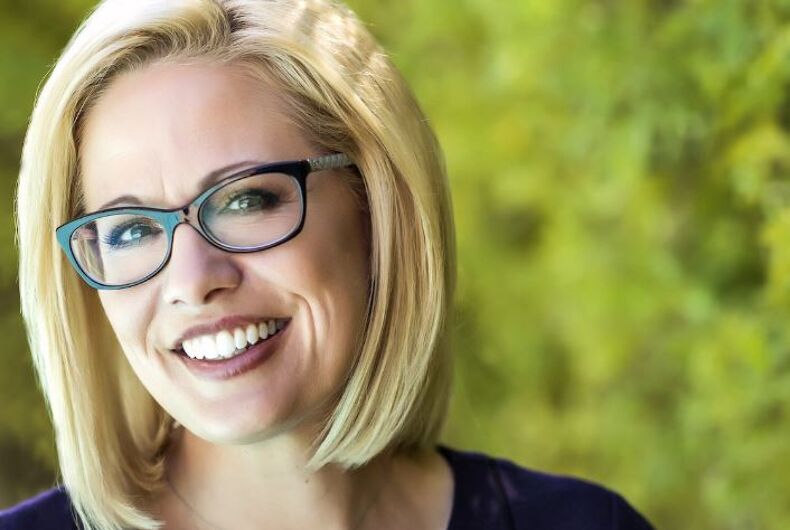 The prospect of a blue wave in next month’s elections is scaring some poilticians on the ballot. Unfortunately, some of them are Democrats.

In at least two cases, high-profile Democratic candidates would like you to forget that they are indeed Democrats.

Krysten Sinema, who is running for U.S. Senate in Arizona, doesn’t even mention her party affiliation in her ads. Sinema, the first openly bisexual U.S. Representative, said in a radio interview that the omission is intentional.

“Because I am an independent voice for Arizonans and I want folks to — when the see my ads or hear from me, or when I’m talking to them or listening to them — I want them to think about who I am as their elected official and as their public servant,” she said in a radio interview on KTAR.

Sinema also refused to say that she was “proud” of the Democratic party.

“I’m not sure that people are even proud of parties anymore because I feel like the parties are, ick, not doing a good job,” she said. That’s an odd line from a LGBTQ candidate running against a party dedicated to opposing her basic civil rights.

Sinema also boasted about working with President Trump on veterans’ issues and has refused to endorse the Democratic candidate for governor.

Meanwhile, in Indiana incumbent Democratic Senator Joe Donnelly has run an ad boasting how he split with his party to vote for President Trump’s border wall and complaining about the “liberal left” trying to cut defense spending. The ad shows a flannel-clad Donnelly chopping wood, in an almost shot-for-shot copy of a parody political ad from HBO’s Veep.

Both Sinema and Donnelly are locked in tight races in states that aren’t slam-dunks for Democrats.

Though it is increasingly purple, Arizona hasn’t elected a Democrat to the Senate since 1988. Indiana is a GOP stronghold, and Donnelly managed to win his first race by the sheer luck of drawing a crazy Republican opponent who suggested that women who have endured “legitimate rape” don’t get pregnant.

No doubt both candidates want voters to believe that they are independent, at a time when polls show voters view both parties with contempt. But downplaying party affiliation is exactly the kind of stunt that makes voters hate politicians.

Sinema is in broad agreement with the Democratic party’s agenda; she voted with House Minority Leader Nancy Pelosi 76 percent of the time in the current Congress. There are certainly issues that the party promotes that Sinema could rightly say she’s proud of instead of pretending that she’s somehow nonpartisan.

While the number of actual swing voters seems to be dwindling as the parties sort themselves ideologically, swing voters do exist and are important. However, those voters may not be cutting the way the candidates think.

In Indiana, Donnelly’s chances seem to hinge on suburban women. Tying yourself to Trump isn’t exactly a winning strategy among those voters.

Of course, it’s not just Democrats who are feeling uncomfortable about party affiliation these days. Republican candidates have been doing their best to distance themselves from their own voting records. But facing a voting base that loves the president, Republicans are resorting to lying, particularly about health care.

If Sinema and Donnelly win re-election, pundits will argue that their strategy of pretending not to be Democrats was a smart one. If they lose, their defeat will be attributed to a range of other factors. But it is a reminder to voters that, when push comes to shove, winning justifies anything–including denying your own party’s principles.

Adam Rippon needs you. So does America.

Forget the midterms. Democrats are already focused on the 2020 presidential race.