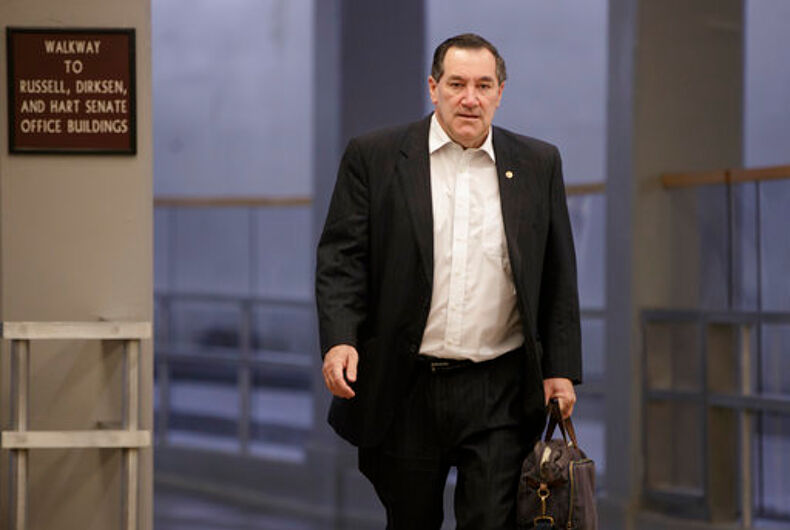 FILE - In this Friday, Feb. 3, 2017, file photo, Sen. Joe Donnelly, D-Ind., arrives early on Capitol Hill in Washington. Donnelly says he'll support the nomination of Judge Neil Gorsuch to the U.S. Supreme Court. The Indiana Democrat announced his support on Sunday, April 2, 2017, for President Donald Trump’s pick, calling Gorsuch "a qualified jurist who will base his decisions on his understanding of the law and is well-respected among his peers." Donnelly faces a tough re-election in 2018. Photo: (AP Photo/J. Scott Applewhite, File)

Sen. Joe Donnelly of Indiana said he would vote in favor of Gorsuch’s confirmation while Sen. Jon Tester of Montana announced he would not back the federal appeals court judge based in Denver.

Donnelly became the third Democrat to break with the party as Republicans line up behind President Donald Trump’s choice for the high court.

With 52 Republican senators, eight votes from Democrats or the Senate’s two independents would be needed to advance the nomination and prevent a filibuster. So far, only Donnelly of Indiana, Heidi Heitkamp of North Dakota and Joe Manchin of West Virginia — all representing states Trump won in November and all up for re-election next year — have said they will vote to confirm Gorsuch.

Tester represents a state won by Trump and faces re-election, too, but he said Gorsuch did not directly answer questions when the two met or during the confirmation hearing. Tester said he based his decision on the judge’s past cases, noting that he found troubling Gorsuch’s record on privacy and that he believes Gorsuch places corporations over people.

Donnelly called Gorsuch, 49, “a qualified jurist who will base his decisions on his understanding of the law and is well-respected among his peers.”

If Democrats mounted a filibuster, Senator Majority Leader Mitch McConnell was expected to seek a change in Senate rules allowing a simple majority of the 100-member Senate to confirm the nomination.

“Neil Gorsuch will be confirmed this week,” McConnell said on CNN’s “State of the Union.” He added: “How that happens really depends on our Democratic friends. How many of them are willing to oppose cloture on a partisan basis to kill a Supreme Court nominee.”

Such a change in Senate rules — known as the “nuclear option” — would likely be retained in the future and thus make Supreme Court confirmations more susceptible to simple party-line votes instead of bipartisan support.

So far, just three Democrats have said they will vote for President Donald Trump’s Supreme Court nominee while the majority of Democrats oppose Neil Gorsuch. That puts Democrats close to the 41 that would force Majority Leader Mitch McConnell, R-Ky., to change Senate rules this week, scrapping the 60-vote threshold to ensure confirmation of Gorsuch with just a simple majority in the 100-seat chamber.

All 52 Republicans back the nominee.

A full list of Democrats and Independents and their positions on the Supreme Court nominee is on the next page.

These diehard hockey fans put their dream wedding on ice