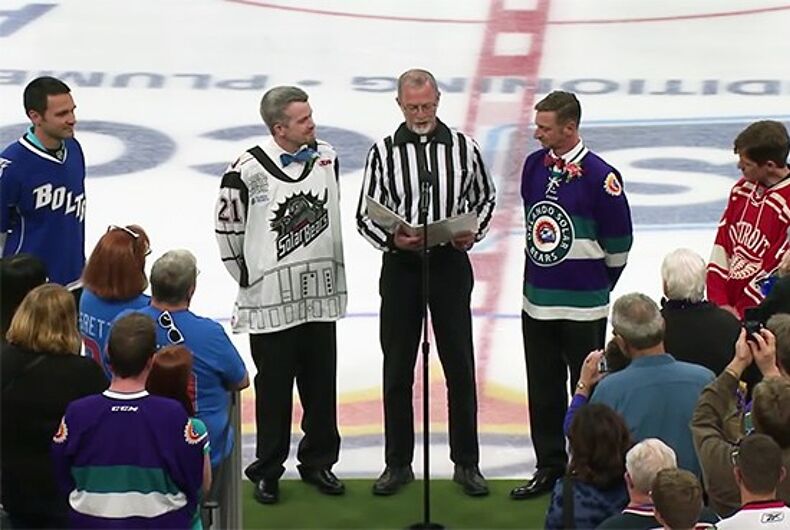 Lifelong hockey fans Eric Pinder and Dwayne are celebrating six months of wedded bliss by sharing the story of how, when it came time for their big day, they put a rink on it.

Their wedding in November 2016 was held on center ice at the Amway Arena in Orlando, Fla., home of the Solar Bears. Each groom wore a team jersey — and a bow tie. The priest, who Pinder notes is gay, wore a black and white striped referee jacket. And it all seemed fitting given their history together, reported Outsports.

“We met at a party and I was wearing a Red Wings Jersey. Dwayne knew the team and player so I was impressed. Plus, he is very cute. So hockey was really our first conversation.

“When we were looking to get married, we thought that doing it before a game would be a great choice — we could get people to go see our local team, the Orlando Solar Bears. I called our ticket rep and asked if we could get married before a game. He said, ‘Hold on,’ then three minutes later got back on the phone and said, ‘Sure, we can do that for you.’

“We had 30 people in a suite after and around 50 who bought tickets and sat in the section next to us. The Amway Arena was great. They let people rotate in and out of the suite so everyone could see our Zamboni cake. The priest is a friend of ours (also gay) who was thrilled to officiate.

“We also had hockey themed gift bags — a puck with our wedding logo, unopened packs of trading cards from the 1990s and M&Ms with our team colors. We are both wearing Solar Bears jerseys, but Dwayne had a game-worn one from “Star Wars” night.”

The officiant, Rev. Gordon Barcalow, asked the couple if they “promise to love and cherish [each other] through power plays and penalty kills, until the final horn of life sounds.”