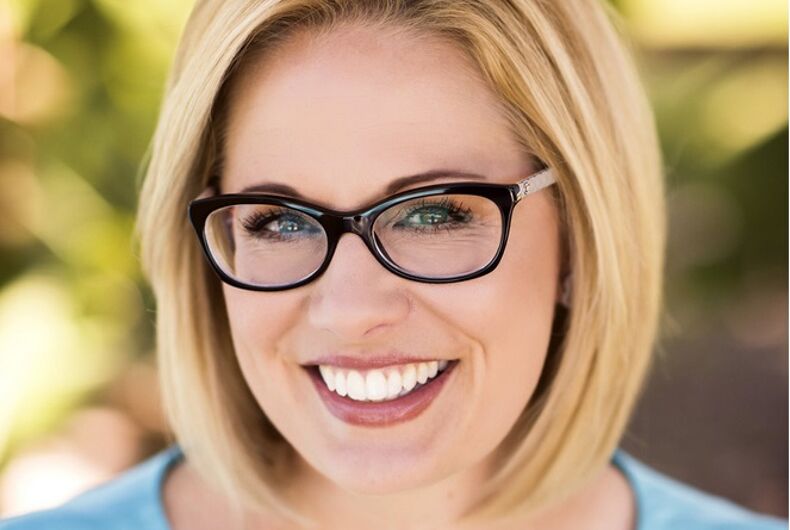 Representative Kyrsten Sinema won the Democratic primary yesterday in Arizona for the U.S. Senate seat left open by Jeff Flake (R), who is not seeking reelection.

If she wins, she’ll be the first bisexual U.S. Senator.

Her Senate race is also one of the most-watched this year. If the Democrats want to take back the Senate, they’ll have to hold all their seats and take two more.

With her race labeled a “tossup” by Real Clear Politics, she would be key to retaking the majority.

Sinema, who won 82% of the vote in the primary, will face U.S. Representative Martha McSally (R) in the general election.

I’m ready to cut through the chaos in Washington and get things done for everyday Arizonans as your Senator. But I need you with me to win this race. Join our team: https://t.co/2lzVdbmP7b #AZSen #AZPrimary pic.twitter.com/hPkbn71dE9

McSally has already indicated that her strategy in the general election will be to portray the moderate Sinema as an extremist.

“When it comes to my opponent, she has a lot of explaining to do if you look at her Green Party-pink tutu, proud Prada socialist past and her extreme makeover,” she told the Arizona Republic.

McSally got a score of 48 on HRC’s Congressional Scorecard for her time in the House, because she voted in favor of several amendments to ban employment discrimination against LGBTQ people but also in favor of religious exemptions and refused to co-sponsor LGBTQ legislation.

“This debate belongs at the state level and was already settled in the courts for Arizona,” she said following the Supreme Court’s Obergefell decision, which expanded marriage equality to all 50 states.

In the statement, she indicated support for religious exemptions to anti-discrimination law. “I will respect the Supreme Court’s decision. We should ensure equal rights and religious liberty are protected, while showing respect for each other about sincerely held disagreements.”

Sinema, on the other hand, is a former Green Party activist and was a liberal state representative before she ran for the U.S. House.

Even in the House, she earned a 100 on HRC’s Congressional Scorecard, co-chaired the LGBT Equality Caucus, and co-sponsored the Equality Act, which would ban anti-LGBTQ discrimination in several areas of federal law.

“This race is consequential not just for the Democratic party and for the LGBTQ community, but for all Americans who demand an end to the political divisiveness that Martha McSally embodies,” said Annise Parker of the LGBTQ Victory Fund.

“An LGBTQ Senate candidate taking down an anti-LGBTQ opponent in a red state will be a defining moment in this year’s rainbow political wave – and will further the evolution in how Americans view LGBTQ people and candidates.”