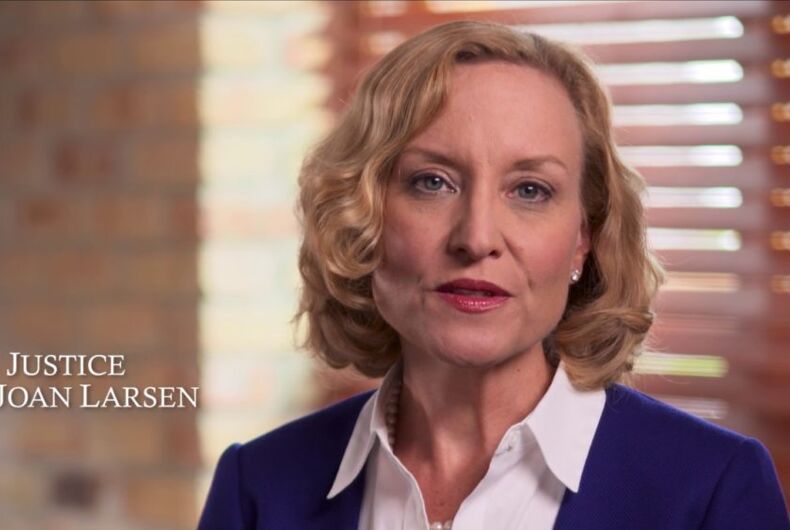 Trump appointee Joan Larsen was confirmed to the U.S. Court of Appeals for the 6th Circuit yesterday on a mostly party line vote. While all Republicans voted in favor of her confirmation, eight Democrats also voted for the notoriously anti-LGBTQ judge.

Both Donnelly and Manchin have been opponents of LGBTQ rights previously but had given lip service to the party line in recent years.

Stabenow, however, is normally considered an ally to LGBTQ people. Larsen sat on the Michigan Supreme Court, however, and both senators from Michigan voted in her favor.

Throughout her career, Justice Larsen has written about and advocated for originalism. This view potentially calls into question her commitment to civil rights for African Americans, women’s rights, and LGBTQ rights since civil rights for these groups aren’t mentioned in the Constitution.

The concern is exacerbated by Larsen’s vociferous praise of her former boss, Justice Scalia, who consistently ruled against voting rights, the right to choose, and granting even the most basic protections to LGBTQ individuals.

In 2004, Larsen sharply criticized the US Supreme Court for overturning sodomy laws, writing that the court “simply cited international conventions and the opinions of foreign and international bodies as if they were well-accepted sources of domestic constitutional interpretation.”

“After reviewing the records of Justice Larsen, we have concluded that her views on civil rights issues are fundamentally at odds with the notion that LGBT people are entitled to equality, liberty, justice and dignity under the law,” the joint letter read. “First and foremost, we continue to have serious concerns about Justice Larsen’s willingness to comply fully with the U.S. Supreme Court’s ruling in Obergefell v. Hodges.”

“In 2016, when Justice Larsen was serving on the Michigan Supreme Court, she refused to review an appellate court’s decision in Mabry v. Mabry. That decision concerned whether a lesbian parent, who did not have custody of her child and had separated from her partner of 15 years, could obtain parental rights under Michigan’s equitable-parentage doctrine, which applies to married couples.’

“Justice Larsen’s scholarship and speeches do offer some insight into her narrow view of LGBT rights under the Constitution,” the letter continued. “Justice Larsen refused to comment on a 2012 speech to a chapter of the Federalist Society in which she criticized the Obama Justice Department’s refusal to defend the so-called ‘Defense of Marriage Act’ in court.”

Milo Yiannopoulos’ sugar daddy cuts financial ties: ‘I was mistaken to have supported him’