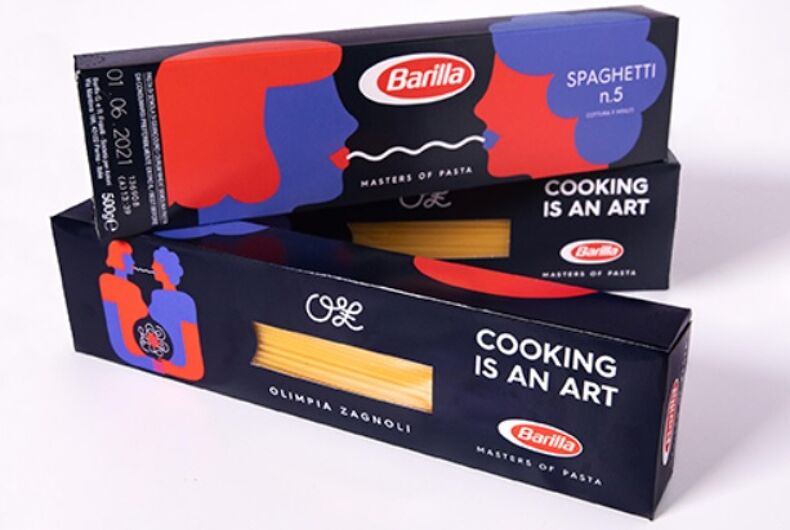 Barilla gave attendees of a contest in Italy boxes of spaghetti with a drawing of lesbians on the box.

At the World Pasta Championship – an event sponsored by Barilla – in Milan last month, hundreds of limited edition boxes of spaghetti no. 5 were given out.

The boxes feature a design by illustrator Olimpia Zagnoli of two women sharing a spaghetti, Lady and the Tramp-style.

“We’ve been following Olimpia with admiration for several years now because we love her style. It’s simple and joyful, like spaghetti with tomato sauce,” said Kristen Anderson, Chief Diversity Officer at Barilla, in a press release.

For Zagnoli, the package is about more than spaghetti.

In 2013, Barilla chairman Guido Barilla said in a radio interview: “I would never do an ad with a homosexual family… if the gays don’t like it they can go an eat another brand.”

He also said that the pasta is meant to defend “the concept of the traditional family.” He later apologized for his comments.

People all over the world boycotted the brand, including Zagnoli.

“The reaction was immediate,” she told British style website It’s Nice That. “Despite his apologies, the day after, the news spread and people began to boycott Barilla products. I was one of them, and have been for quite a long time.”

In Italy, Barilla is more than a pasta brand – its various products can be found in almost every aisle of the grocery store. Zagnoli posted on Instagram that she stopped buying everything Barilla, including cookies and flour.

So when Zagnoli was contacted last year to collaborate with Barilla, she sent in a design of two women sharing spaghetti, thinking that they would refuse it.

But they accepted it. “It turns out while I was protesting in my kitchen Barilla made significant progress, radically redefining its code of ethics and adjusting its internal policies,” she said.

🍝? @barilla #pastaworldchampionship The first time i met with the team at Barilla, i immediately addressed the infamous statements that came out in 2013 about gay couples. I also told them that after that i was so disappointed that i stopped buying their products (not just pasta but flour, cookies, snacks…) for many years. What i didn’t know was that while i was protesting in my kitchen, Barilla made significant progress radically redefining its Code of Ethics and adjusting its internal policies to ensure greater inclusion and enhance the respect for different sexual orientations, gender equality, rights of the disabled, and multicultural and intergenerational issues. It now collaborates with different foreign organisations that support the rights of LGBT communities (Catalyst, Parks, ValoreD, Human Rights Campaign, GLAAD, The Tyler Clementi Foundation, The 30% Club); it supports associations that promote LGBT rights and events against homophobia such as, for example, Spirit Day, the largest campaign against bullying and for the inclusion of LGBT youths promoted by the American GLAAD; it promotes and actively participates in local meetings with LGBT communities. Barilla also scored 100% in the Human Rights Campaign Annual Corporate Equality Index from 2015 to 2018. I took this assignment because i was free to express my personal point of view through my illustrations and i’m glad i had such a big platform to do so. I hope corporations, big/small brands and people will learn from their mistakes and educate themselves to make this world a better place.

“I just think that advertising and communication can change how we feel about ourselves and others and if it’s done right, it can shape the visual language of a generation.”