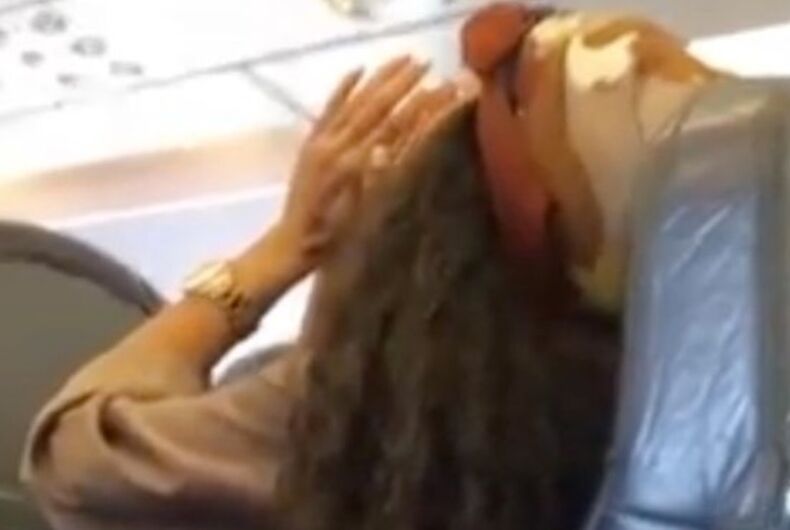 An unidentified woman berated a fellow passenger with homophobic slurs on a flight into the Los Angeles airport.Photo: Screenshot

A woman flying into the Los Angeles airport was caught on video berating a fellow passenger with homophobic slurs.

She verbally assaulted a man who sat near her on the flight for “about an hour” according to passengers. He isn’t heard saying a word on the video.

When other passengers asked her to stop because there was a child seated near her while she cursed, the woman responded with “That’s not my kid, I don’t give a f**k. Shut your f**king mouth, it’s got nothing to do with you.”

At another point in the video, she stands in the aisle egging the man on and urging him to hit her.

Related: Did Southwest Airlines kick out a couple because they’re gay?

The incident happened on November 2, but the airline it happened on isn’t clear. Video of the altercation was sent to The Mirror by the person who filmed it.

“Shortly before this video was filmed she threatened a flight attendant who appeared to come up and try to calm here after other attendants had been unsuccessful,” the person told the newspaper. “That flight attendant called for ground control and I assume the police who did end up escorting her off the flight once we landed.”

He added: “She used racially tinged language and homophobic slurs on flight personnel as well as passengers.”