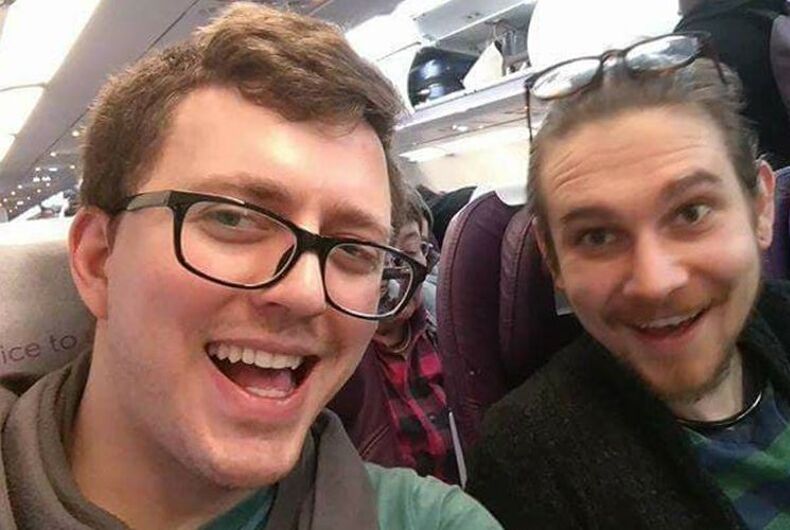 A couple from Iceland were kicked out of an airplane before it took off, and they think it happened because they’re gay.

Hafsteinn Himinljómi Regínuson and his US-born boyfriend James McDaniel, 31, were in the US for the holidays. On December 22, they boarded a flight from Baltimore to Atlanta, the last leg of their trip to visit McDaniel’s mother and brother.

“We boarded our flight to Atlanta on time and were getting cozy, glad to be on the last leg of our trip,” McDaniel, who has been an Icelandic citizen for two months, posted on Facebook. “Then, while we were sitting in our seats on the plane three police officers came onto the plane and told the two of us we had to leave immediately.”

The officers accused Regínuson of throwing things at a flight attendant on a previous flight. McDaniel denied that happened, suggesting that they got “mixed up with someone else.”

Regínuson, who was in the US for the first time, started to cry at this point, and McDaniel said that the officers told him that he would be arrested if he didn’t calm down.

“Somehow, my survival instincts kicked in and I was able to talk them down and get the two of us out of the airport without him being taken away,” McDaniel wrote.

They got a hotel for the night and then took a train to their destination.

McDaniel told GayIceland that he believes this is a case of anti-gay discrimination. “The main difference between us and other passengers was that we were openly gay. Not in an over the top or publicly disrespectful way, but in a way that we are used to living in a free country like Iceland.”

“We hold hands when we walk together,” he continued. “We might take a brief kiss now and then. And on the flight, Haffi has a tendency to curl against my shoulder and nap. All things which, of course are normal between a healthy loving adult couple, no matter what part of the sexual spectrum they are, whether straight or gay.”

A spokesperson for Southwest told Gay Star News that some customers had complained about McDaniel and Regínuson’s behavior.

“Our Ground Operations Employees followed guidelines and requested the Customer exit the aircraft due to behavior that demonstrated signs of intoxication, which continued once off the aircraft. As a precaution, law enforcement was called to the gate while our Employees were speaking with the Customer.”

McDaniel denies that they were drunk and said that they only had a “couple of beers” with dinner before the flight. “They never made accusations of intoxication on the plane or off.”

Southwest refunded them for the tickets and offered to rebook them the next day, but they chose to take the train instead because they were “humiliated and distrustful.”

“‘I just feel so ashamed that this is my boyfriend’s first experience in the USA,” McDaniel said.

TV writer Ryan Murphy: My dad ‘beat me bloody with a belt’ when I came out