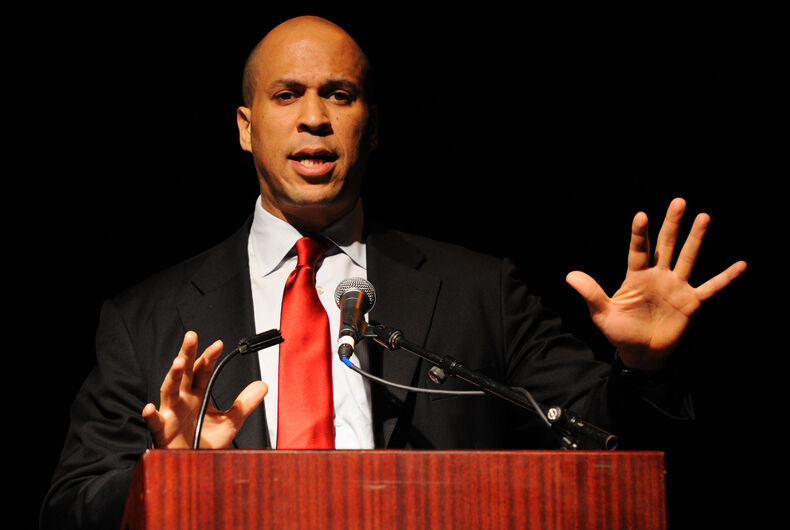 Then-Newark mayor Cory Booker spoke at the Russ Berrie Awards for Making A Difference Celebration on May 3, 2011 at Ramapo College. Booker now serves as a US Senator representing New Jersey.Photo: Shutterstock

Democratic Senator Cory Booker, a potential presidential candidate in 2020, has been accused of sexual assault by an anonymous gay man on Twitter. But is the allegation true or a right wing smear campaign targeting a single popular politician?

With Russian bots promoting fake news regularly about Democratic politicians and right wing activists deliberately making up stories in an attempt to take out Democrats, many are expressing skepticism about the source of the allegation against Booker.

But that hasn’t stopped Republicans like Donald Trump Jr. from pushing the story in an attempt to take down a potential rival to President Trump’s 2020 re-election campaign. Most of the Republicans pushing the story keep tying it to the controversial nomination of Brett Kavanaugh to the Supreme Court.

The anonymous man says he’s a liberal, but “no longer consider myself a Democrat.” He insinuates he voted for Donald Trump in the 2016 election, but says Booker was “a hero” to him.

In a description that reads like a dime store novel, the man alleges that Booker groped him in a public bathroom and tried to get the man to perform oral sex on him. Booker was supposedly visiting the man’s workplace at the time.

The man says he ran into Booker in the bathroom and the two chatted in the doorway before Booker pushed him up against a wall and groped him against his will.

“He then put his left hand on my groin, over my jeans, and began to rub. I seem to remember saying something like ‘What is happening?’ It was a bit like having vertigo,” the anonymous Twitter user wrote. “He then used his other hand to grab my left hand with his right and pulled it over to touch him.”

“At the same time, he disengaged from rubbing me and used his left hand to push me to my knees from my shoulder for what was clearly a move to have me perform oral sex on him. At that point, I pulled away quite violently and told him I had to go. I did not see him again before he left.”

Related: Nearly half of Republican evangelicals think Kavanaugh should be confirmed even if he’s a rapist

“I told her my story; disclosing my real name and the details of my case,” he wrote. “This included the precise date, location, some corroborating photographic evidence and two possible hearsay witnesses that I had told my story to subsequent to the incident. It was, at the very least, much more probative evidence than what was brought forth during the Kavanaugh debacle.”

“Ms. Dhillon responded to me with respectful immediacy, offering candid advice and compassion tempered with pragmatism.”

The over-the-top praise for Republican operatives and castigation of Democrats combined with with a story bound to bubble up anti-gay stereotypes about the single and popular politician have many LGBTQ people doubting the authenticity of the allegation.

As the story sweeps the right wing media, Senator Booker has not commented on the matter.

Based on @CoryBooker’s rules when it comes to due process for accused sexual assaulters, we must assume he’s guilty until he proves otherwise by calling for an FBI investigation into himself. I assume he won’t be running for president until that investigation is complete.

#CoryBooker Sexually Assaulted Me
and why it won't matter to the #metoo movement. https://t.co/8VQuMGY8bj pic.twitter.com/D5DWnFmfzd

In a trial, yes, he deserves that presumption. But what if we view this as a job interview, to see if @CoryBooker is qualified for public office? #KarmaIsABitch https://t.co/aT4SKYvivs