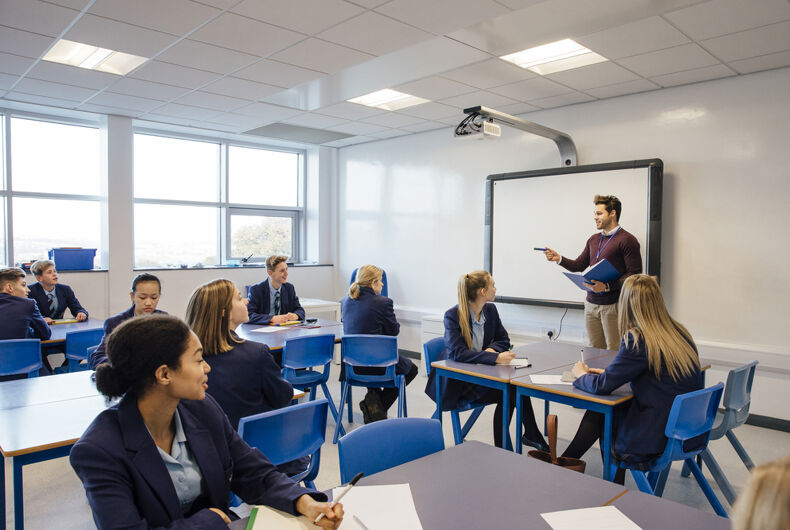 Carrie Rowe, the superintendent of the Beaver Area School District in Pennsylvania, came out at a school board meeting last night to stop a growing campaign to oust her.

The controversy started when Principal Steve Wellendorf was placed on leave earlier this year.

While the reason he was placed on leave has not been made public, Christian conservatives did not hesitate to say that it was because he was associated with a local, anti-LGBTQ Christian group: Beaver Valley Young Life (BVYL).

Tensions came to a head at the school board meeting last night, which was preceded by a rally in favor of Wellendorf and another for Rowe.

“I’m gay,” Rowe said, addressing the meeting. “I wanted to tell you that straight away, because it is likely the reason that some of you are here tonight.”

“Last week I was made aware that a group of people were planning to protest my continued employment in this district because I was allegedly firing Christians to promote a homosexual agenda,” she continued.

“So let’s be clear tonight about what my agenda is. My agenda is to provide a safe environment for all students, including students who identify as part of the LGBTQ community.”

She went on to talk about LGBTQ youth suicide, and told attendees to watch their comments since queer teens will be listening.

Related: A guidance counselor who was outed & fired by her school talks to Ellen

Over the past few weeks, resident Luke Berardelli has been vocal in organizing parents to complain about Wellendorf being placed on leave, which he says is a sign of religious intolerance and an attempt by Rowe to force members of BVYL out of the school district, which Rowe denies.

Berardelli said that there is a “toxic culture” of anti-Christian sentiment at the school. BVYL, which is devoted to proselytizing and attempting to convert students, had been unfairly targeted, he said.

BVYL bans LGBTQ people from serving as volunteers. While they are – so generously – willing to proselytize to LGBTQ youth, the BVYL handbook says that they should try to provide “medical, psychological… assistance” to them.

BVYL believes that the “homosexual lifestyle and practice [is] clearly not in accord with God’s creation purposes,” adding that LGBTQ people are a “rejection of the divine creation purpose to reflect the glory of God.”

So it’s not surprising that parents who support BVYL also attacked Rowe for being gay.

Janet Holp-Hedge wrote a letter of support for Wellendorf to the district that accused Rowe of “promoting homosexuality.”

“The superintendent is an atheist as well as being a lesbian,” she wrote, listing other faculty members she believes are gay or non-Christian. “My concern is that their views will be pushed onto our children.”

“One English class already had to do a paper on LGBTQ. When a student said that it’s not normal, the teacher said that he couldn’t say that. My children have moral beliefs and Christian beliefs that we taught them from day one. I do not want the school trying to indoctrinate them that this is the new normal. It is not. It is against God’s will for us. They can do what they want in their own personal life, that’s on them, but don’t try to mess with the beliefs of very impressionable children.”

Berardelli organized a rally in support of Wellendorf for last night, just before the school board meeting.

“I’m not for forcing people to open Bibles,” said Shawn Maloney, who attended the rally. But he added that he wants “Judeo-Christian values and principles” taught in schools.

“All we want to see is [Wellendorf] get his job back,” Berardelli told the rally as he gave them advice on how to address the school board. “So if you do elect to talk, I am just asking you to remember, be civil, be respectful.”

About 20 students also turned out to rally in favor of Rowe, with signs that read, “Textbooks not Bibles” and “Keep church + state separate.”

“She tries to make (school) a comfortable environment for everyone,” said student Dominick Reagan.

At the meeting, Berardelli’s comments were more restrained. He did not accuse the school board of religious intolerance.

“We don’t openly know – you’re right – the reasons” Wellendorf was put on leave, he said.

“I’m asking you to allow the man to be considered as time served, away from students, away from what he worked all summer to help prepare, the first day of school, away from his job,” he continued.

“I’m also asking that maybe this is a good opportunity for all of us to show other school districts, other communities – not just here not in this county we have the media here we have the press here everywhere – what unity looks like. Let’s reinstate Steve.”

Rowe, in her speech, said that she was being targeted because of her sexuality.

“What’s happening to me is a form of bullying, plain and simple,” she said. “These individuals are trying to bully me out of a job that I love because legally, they can. The fact is that in Pennsylvania, I can be fired simply for being gay. There are no civil rights protections for gay individuals in Pennsylvania.”

“The other frightening thing about this situation is the brazen way in which it is being carried out. Five years ago, these people would need to trump up some job related reasons for my termination, and hide the real motivation that they seek to have me dismissed as the superintendent. And that’s the other reason that I’m speaking out here today.”

A gay kid was repeatedly hospitalized after being bullied. Now he’s suing the school.