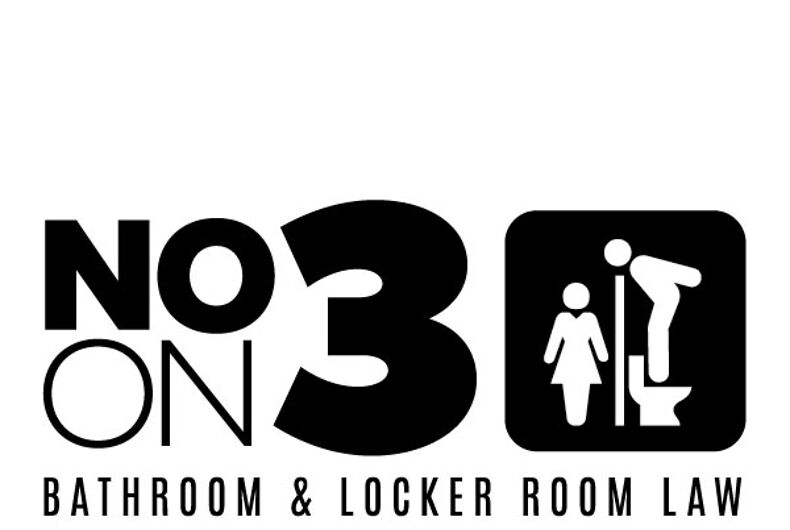 Logo for the No on 3 campaignPhoto: No on 3

In the latest example, proponents of a Massachusetts ballot measure to overturn transgender protections are running an ad that suggests the 2016 law puts women at risk from sexual predators. In the ad, an obviously cisgender male enters a women’s locker room as a woman is unbuttoning her blouse.

Cue the threatening music and heavy breathing. The law “puts our privacy and safety at risk,” the female narrator concludes. “It goes too far.”

Just to add to the hamfisted approach, the logo of the group seeking to repeal the measure features a man standing on a toilet peering over a bathroom stall partition to stare at a woman. The ad takes a somewhat different tact than past anti-trans ads. Many of those focused on the supposed threat to children.

The campaign, called “No on 3” after the ballot measure number, is just the latest attack on transgender rights. The most notorious example was North Carolina’s HB 2, passed by the state legislature in 2016. The bill cost the state millions in lost business from boycotts and cost Gov. Pat McCrory, who signed the measure, his job.

But as the Massachusetts ballot measure proves, opponents of transgender rights learned nothing from that debacle. Instead, they have turned to one of the most liberal states in the nation to overturn a two-year old law signed by a Republican governor.

Still, supporters of the law are taking no chances. Freedom for All, the group leading the campaign to keep the law in place, has outraised the opposition by more than tenfold: $1.8 million vs. $106,000.

The scaremongering ad comes just a few weeks after release of a major study on trans protection laws and bathroom safety. The report, by the Williams Institute at the UCLA School of Law, focused on Massachusetts and found no link between the law and increased danger.

“This study provides evidence that these incidents are rare and unrelated to the laws,” lead author Amira Hasenbush said.

Freedom for All is using the campaign to conduct a statewide education campaign about transgender people.

Opponents of the law seem to be pursuing a high-risk, high-reward strategy. If they succeed in a liberal bastion like Massachusetts, they will quickly export the strategy to other states even more receptive to the message.

Of course, the ballot measure isn’t really about bathrooms. It’s about nondiscrimination protections and equal rights.

But the right has long been reliant on portraying the LGBTQ community as predators. That lie has found new life recently in the debate about pedophilic priests in the Catholic Church. Conservative Catholics insist that the problem isn’t pedophilia, but homosexuality.

Even if Massachusetts law prevails, it will come at a high cost, not just financially. It proves once again that advances can never really be considered permanent, that every victory requires a defense.

That lingering sense of uncertainty can’t be settled at the ballot box.