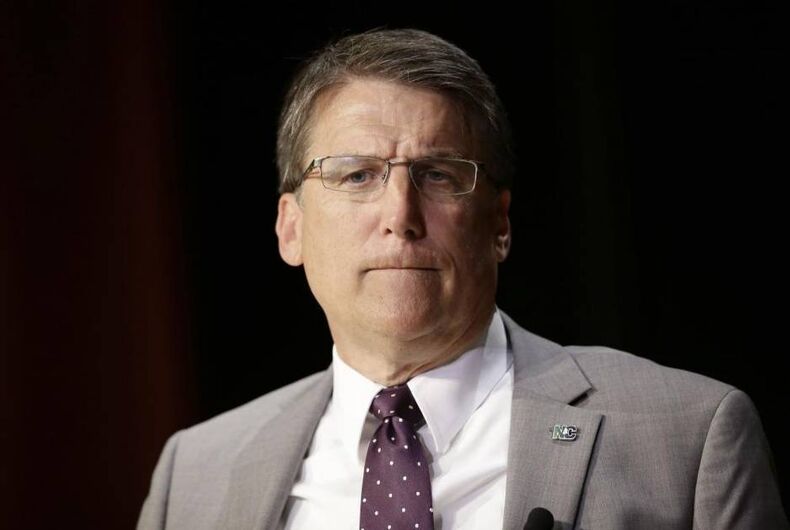 If you doubt it, just ask the residents of North Carolina, whose anti-LGBTQ law House Bill 2 (HB2) has cost the state millions in lost revenue and thousands of jobs.

Or ask the former governor, Pat McCrory, who lost his reelection bid in a state that went for Trump, thanks in no small part due to the unpopular law he signed just as soon as it hit his desk.

McCrory lost not only his fight to stay in office, but also a fight with The Charlotte Observer to keep his emails private. Through those emails, we have learned that he signed HB2 a day after receiving a poll that said it would be popular. Well, so much for that. It’s not, and increasingly, neither is he.

While HB2 has been referred to primarily as a “bathroom bill,” it does much more than just keep transgender people out of the bathrooms matching their gender identity in government owned buildings.

Certainly, it does that, and it alone would be bad enough, but HB2 also invalidated all non-discrimination ordinances passed by cities and municipalities in the state, and further, prevented them from increasing their minimum wage above the state’s paltry $7.25 an hour.

At first, it appeared McCrory might bounce back, right into a cushy Trump Cabinet position. He had remained loyal to Trump throughout the rocky campaign, continuing to appear alongside him at rallies, while cracking jokes about where to find the bathrooms.

He met with Trump just two days after losing his reelection bid to Democrat Roy Cooper, but so far he has not been offered a job.

In fact, it appears he is having a hard time finding work anywhere.

McCrory said in a recent interview that HB2 is making it hard for him to find employment, as people think he is a bigot, reports Raleigh’s The News & Observer.

He said the discriminatory law he signed “has impacted me to this day, even after I left office. People are reluctant to hire me, because, ‘oh my gosh, he’s a bigot’ – which is the last thing I am.”

In that same interview, a podcast for WORLD, an evangelical Christian news site, he remained tight-lipped when asked if he is still being considered for a Trump Cabinet position. Either way, he remains a strong Trump backer, calling him “a breath of fresh air.”

McCrory continued to lament being seen as a bigot in that interview, before exhibiting that he still doesn’t understand what science is discovering about gender identity and the brain.

“If you disagree with the politically correct thought police on this new definition of gender, you’re a bigot, you’re the worst of evil,” he said. “It’s almost as if I broke a law.”

“You ask the doctor if it’s a boy or a girl, you don’t ask the baby,” he continued.

Speaking of, McCrory’s trips to the doctor’s office are set to get more expensive than they might have been had his fellow Republican friend’s attempt to get him free lifetime healthcare been successful. The perk was considered, but ultimately rejected, during a special session.

In another example of GOP lawmakers considering McCrory’s well-being, Sen. Dan Bishop of Charlotte proposed legislation to protect current and former public officials from threats and intimidation, after protesters chased the former governor down an alleyway, shouting, “Shame!” and calling him “an anti-gay bigot.”

It’s not only strangers who are less than friendly to McCrory these days.

He told an audience at an event back in October, hosted by the Family Research Council, that he and his wife were being shunned.

“It’s almost like the George Orwell book 1984, where if you disagree with Big Brother, or you go against the thought police, if you remember that book, you will be purged and you will disappear,” he said. “My wife, for example, in Charlotte, she primarily stays in Charlotte. She’s been disinvited to charity events, and basically, they call her up and they say, ‘you know, you better not come. You better not come.”

“My wife and I, we’re being shunned for a political disagreement, a value disagreement,” he continued. “And it’s personal, it’s death threats. Last week I was verbally assaulted by a 21-year-old drunk student. And she was arrested. And those are tough. Everyone says, ‘Gosh you must have thick skin.’ I don’t have thick skin, I just hide it…It gets to me, I just hide it until I go home and sit in a room or walk a dog and I go, ‘Wow, this is depressing.’ So I need to let you know it’s not easy.”

So please, a moment of silence and a single tear for former governor Pat McCrory. A man who has made the lives of countless LGBTQ people, especially those in the trans community, a whole lot worse than just “not easy.”

Will Nevada be the next state to ban conversion therapy?