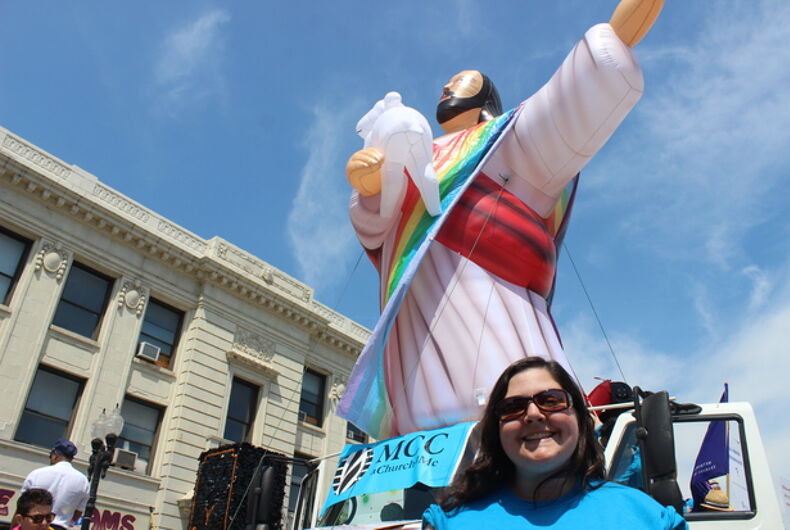 Evangelical hate preacher Franklin Graham will be visiting Blackpool, England this weekend and the locals plan on letting him know he isn’t welcome. And they’ve come up with some innovate ways to show it.

Graham, the son of famous evangelist Billy Graham, has become known for his nonstop attacks on women, LGBTQ people, and Muslims. He is also one of the most vociferous supporters of the decidedly unChristian President Trump.

The Muslim Council of Britain has called on the government to ban Graham from the country, citing his record of using hate speech against minorities. Several local members of Parliament also petitioned government officials to revoke Graham’s visa “on the grounds that his entry and presence is not conducive to the public good.”

Since it looks likely Graham will be allowed into the country, the town is taking matters in it’s own hands. The local council announced it will light up Blackpool Tower in rainbow lights and fly a pride flag from the top of it.

Related: Franklin Graham says gays are out to ‘recruit’ kids through marriage, adoption

“The council is a strong supporter of all equalities issues and we use the rainbow flag and its derivatives on a regular basis to demonstrate that support across the whole year,” a council spokesperson said.

But local LGBTQ organizations and welcoming churches plan a protest of a different sort. Along with inclusive services and other events, the groups will parade a four foot tall “carnival model” of Jesus wearing a rainbow sash through the town when Graham arrives.

Related: Is Franklin Graham positioning himself to run for President?

Gordon Marsden, the Labour MP for Blackpool South wrote to Sajid Javid, the home secretary, to say he’d received a “wide number of representations from constituents, including local clergy and faith leaders, who were alarmed and appalled by the derogatory and inflammatory views that Franklin Graham has consistently expressed towards Muslims, members of the LGBT community and others”.

He added: “Despite the concerns and disquiet that his proposed visit has caused, Franklin Graham has made no attempt to address those concerns, or to withdraw or modify any of the views that I and others have described. Indeed he has continued to express them and emphasise his intention to continue their expression as part of his ‘mission’ to the UK.

“I therefore ask you to consider urgently now stopping any further escalation of tension and hurt towards the groups he continues to attack in his preaching by barring his ability to speak at the Winter Gardens [in Blackpool].”

Graham has expressed support for the white nationalists who rioted in Charlottesville, said same-sex marriage is Satanic and Islam is “wicked,” and praised Russian President Vladimir Putin’s bloody crackdown on LGBTQ people.

The religious right is attacking trans rights at the ballot box in Massachusetts. There’s a reason.