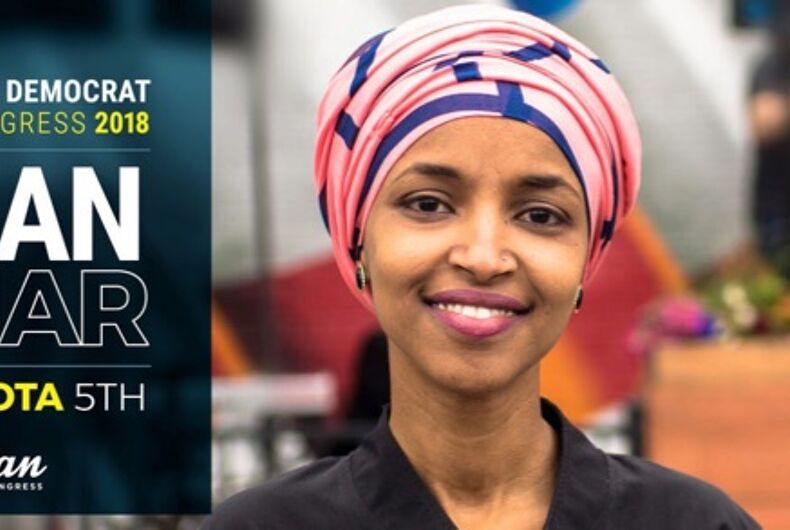 Ilhan Omar is running for Congress in Washington state.Photo: Campaign

Dynamic congressional candidate Ilhan Omar is a Somali-American politician from Minnesota who, in 2016, was elected a Democratic-Farmer-Labor Party member of the Minnesota House of Representatives.

In 2016, She made headlines for taking part in her ceremonial swearing-in with her hand on the Quran. The now-36-year-old was the first Somali-American legislator elected to office in the United States.

Today, Omar is positioned to become only one of two Muslim-American women ever to win a congressional primary election. The other candidate is Michigan Democratic House nominee Rashida Tlaib, who is running unopposed.

In a Voice of America story titled “Muslim-American Women Seek to Represent Changing Face of U.S. in Congress,” journalist Kane Farabaugh writes, “With at most token opposition in the Nov. 6 general election, they are virtually assured of seats in the U.S. House of Representatives next January.”

It is estimated that Muslim Americans represent approximately 1% of the total U.S. population. Until this year, fewer than 300 Muslim Americans served in local, state, or federal government, according to some estimates.

So, who exactly is Omar? And why is she running?

Artist Joe Burns painted 23 portraits of immigrants who reside in the Twin Cities, bringing light to the stories and contributions of members of our society not often heard from. I’m honored to be one of them.

“We started this campaign to prove people are ready and willing to fight for an America that works for all of us,” Omar told CNN.

“To every staff member, volunteer, donor, and voter, this win is just as much yours as it is mine. Together, we will move our district, state and nation forward,” she said.

She has also said, “I’m a legislator, a refugee, and a working mom. But above all, I’m an organizer. And I’m ready to organize for the America we deserve. I’m asking you to join me.”

On the subject of LGBTQ rights, Omar has said, “I will fight in Congress to uplift the voices of the LGBTQIA+ community, and especially when that intersects with other marginalized identities.”

She has also said, “I will fight to end the epidemic of bullying and violence against queer youth. Young LGBTQIA+ are disproportionately affected by mental illness, homelessness, and drug abuse and addiction. We must treat these issues as a public health crisis.”

Alexandria Ocasio-Cortez, once called the “Sarah Palin of the Left,” made strides more than two decades ago when she arrived in the U.S. as a refugee. She is publicly backing Omar in her campaign.

Omar’s campaign slogans revolve around “Medicare for all,” abolishing ICE, tuition-free college, and raising the minimum wage to $15 an hour. She is also a fierce advocate for women’s rights and protections.

It was amazing to join thousands of Minnesotans this morning to celebrate #EidAlAdha at the #USBANKSTADIUM. Eid Mubarak from our family to yours ❤️ pic.twitter.com/bddnBDHcIo

Omar is being endorsed by Minnesota Gov. Mark Dayton and groups like MoveOn, NARAL Pro-Choice America, Peace Action, and Democracy for America.

Should Omar win the seat left behind by Rep. Keith Ellison, she would more than just an election; she would win freedom for Muslim human rights in an Islamophobic Trump era. And that is huge.