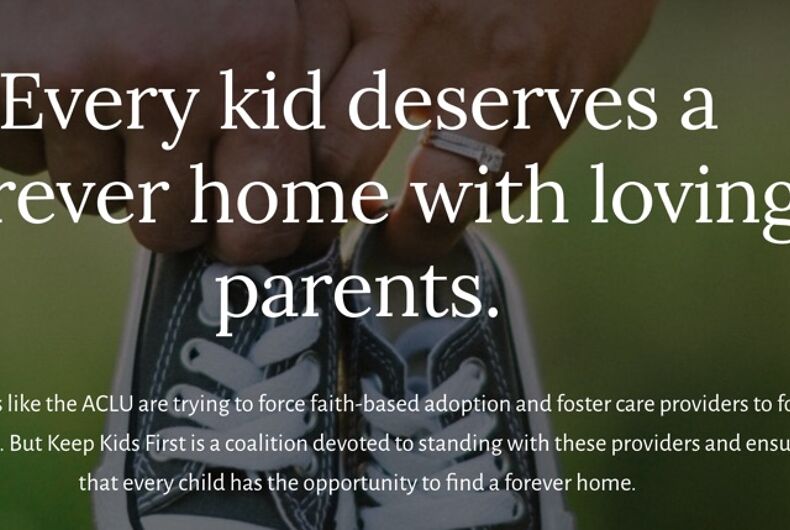 Anti-LGBTQ and conservative groups seem to be stepping up efforts to undermine gay adoption and gay families via a website pushing a deceptive campaign.

Groups such as the Family Research Council, the Heritage Foundation, the Alliance Defending Freedom, and a few others have been steadily making the case that faith-based foster care and adoption agencies which refuse to work with gay couples should still receive tax dollars. A few states, such Oklahoma and Kansas, have passed legislation saying so.

Other municipalities, such as Philadelphia, however have made it clear that tax dollars shouldn’t go to entities which discriminate for any reason. And Philadelphia won in court on that premise.

Now a website sponsored by the groups makes the case for tax dollars going to discriminatory agencies. The website and hashtag #keepkidsfirst claims that children will suffer if faith-based adoption and foster care agencies are made to follow civil rights laws.

Hundreds of adoption agencies and foster care providers across the country are founded on Christian beliefs and operate according to those beliefs. But a current effort is underway to target these faith-based providers and force them to abandon their beliefs or shut them down. Why? Because these faith-based adoption and foster care providers believe that every child deserves the chance to be raised by a father and mother.

Organizations like the ACLU are trying to force these providers to go against their beliefs and place kids in homes with couples who are in a same-sex relationship. But eliminating faith-based adoption and foster care providers means that fewer children will find a forever home.

The website is built on the dishonest premise that some people, particularly the LGBTQ community, are attempting to shut down faith-based adoption and foster care agencies. In reality, the central argument is simple – if these agencies want to discriminate against the LGBTQ community, they shouldn’t be allowed to do so while receiving tax dollars.

By keeping the plight of children needing adoption in the forefront, the sponsors of the website hope to draw attention away from its darker aspects – undermining adoption laws and the dignity of LGBTQ taxpayers.

It has been proven time and time again that same-sex households are wonderful places to raise children and we make great parents.  If religious foster care and adoption agencies choose to ignore this, that is their right.

What they are doing is wrong because for all of their bluster about providing children with good homes, they are deliberately ignoring good homes. And the LGBTQ community shouldn’t be forced to surrender our hard earned tax dollars to promote their prejudices.

Furthermore, it is extremely sleazy that groups like the Family Research Council, the Heritage Foundation, and the Alliance Defending Freedom are again exploiting children as shields to make their homophobia seem more palpable.

When one takes into account their extensive history of pushing anti-LGBTQ laws, promoting anti-LGBTQ prejudices, and generally making life hell for the LGBTQ community, their so-called concern about children is merely a smokescreen for more of their bigotry.

Is it time to expand the definition of ‘veteran?’

This Muslim American woman will be an LGBTQ champion in Congress