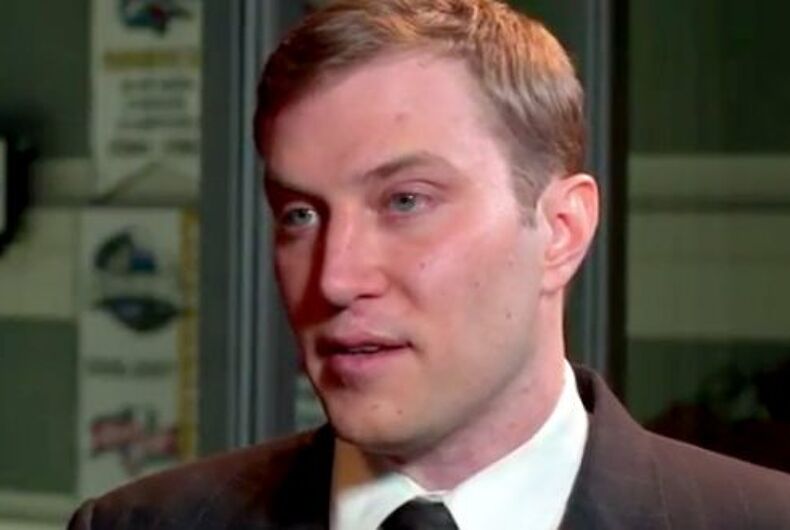 Christopher Sevier is “a notorious legal troll with a troubling history of bigotry, violence, and stalking” according to the Bayou Brief. He’s filed lawsuits nationwide seeking the right to marry his porn-filled laptop and sued Congressman Alan Lowenthal for posting a rainbow flag outside his office door.

Sevier has lost every lawsuit and been suspended from practicing law in Tennessee. The state’s bar association said he has a “mental illness.”

“By bringing this lawsuit, we are unapologetically and firmly defending the civil rights movement led by pastor Martin Luther King,” Seviers said when announcing the lawsuit he filed on behalf the crackpot religious groups Warriors for Christ and Special Forces of Liberty.

“The evidence would suggest that the self identified transgendered. They are using a government facility to show that the governments backs their worldview to then target children, to indoctrinate them under a faith based ideology.” Sevier said according to the local Fox affiliate.

If the federal court won’t shut down the reading time, the groups say they want a pastor on hand to “rebut” the drag queens. Since the event involves reading children’s stories like Clifford the Big Red Dog and Goodnight Moon, there isn’t anything to challenge except the people reading the stories.

Related: Man who wants to marry his laptop gets laughed out of federal court

He’s also been charged with stalking a 17-year-old girl, assaulting his father-in-law in an attack that sent his 7-month-old son to the emergency room, and attempting to forcibly abduct his son. He’s barred from contacting his own child now.

No court has ever decided that “secular humanism” is an actual religion.