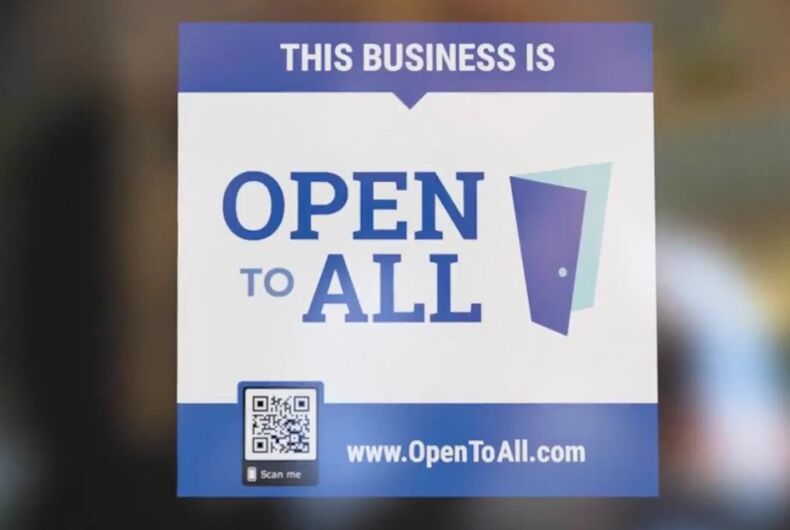 Over 1200 businesses – including Yelp, Levi’s, Lyft, and Airbnb – have launched “Open to All,” a project to get businesses to show that they don’t discriminate.

The project will give businesses two ways to show that they do not discriminate on the basis of sexual orientation, gender identity, race, or other characteristics. They can post a sticker on their windows that says that they are open to all, and they can check a box for an “open to all” attribute on Yelp.

Businesses have to agree to the Open To All pledge to join the campaign, which is to:

Not discriminate against any individuals or deny them goods or services based on any of these characteristics, and to provide all goods and services to everyone on the same terms.

And discrimination in the health care sector:

The Movement Advancement Project is behind the coalition, and they said that it was “born out of” both the Masterpiece Cakeshop decision – a narrow win for a baker who refused to serve a gay couple – and the lack of discrimination protections for LGBTQ people in public accommodations. Because while the Masterpiece Cakeshop decision did not invalidate state anti-discrimination laws, many states currently don’t have them at all.

“No one should have to worry that they will be denied service,” said Calla Rongerude, Open To All’s campaign manager. “No one should be turned away from a business simply because of who they are.”

Of course, a sticker on a door doesn’t mean that a business won’t end up discriminating anyway. “When businesses declare that they are Open to All, that’s an important first step in engaging in that dialogue,” their website says.

If people experience discrimination at an “Open To All” business, they are encouraged to contact one of the civil rights or LGBTQ organizations associated with the coalition.