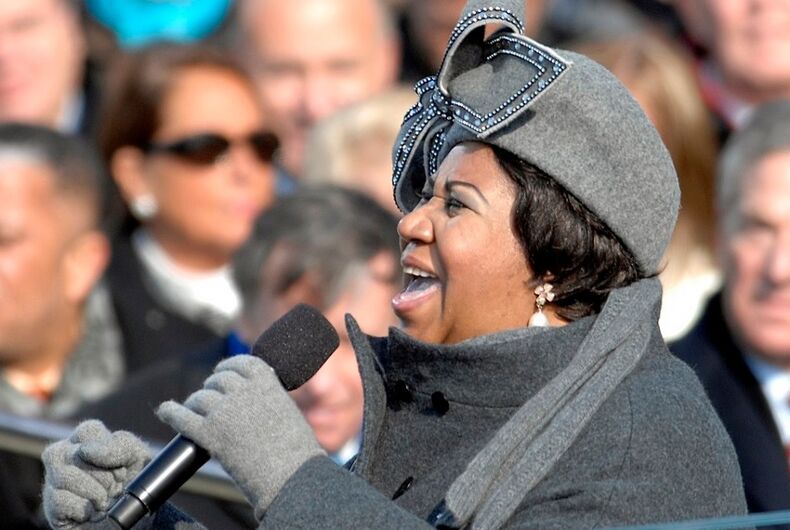 Legendary singer Aretha Franklin will be taken to her final resting place in the same hearse that drove Rosa Parks. Franklin died on August 16 of pancreatic cancer at age 76.

The four-day funeral started Tuesday, as the Queen of Soul was lying in repose at the Wright Museum of African American History in Detroit so that fans could say goodbye.

The Wright Museum is the second-largest black museum in the U.S., and it hosted a viewing in 2005 for civil rights activist Rosa Parks. Franklin performed at Parks’s funeral.

“I think it’s incredibly significant – she is being honored almost like a queen at one of the most important black museums in the United States,” said Paula Marie Seniors, an associate professor of Africana studies at Virginia Tech.

“We know that she would have wanted nothing but the best,” said Sabrina Owens, Franklin’s niece who was tasked with planning the funeral in just two weeks. “She gave the best, she expected the best and she would want her fans to have the best.”

Her body was dressed all in red, down to her crimson heels, a tribute to her honorary membership in the Delta Sigma Theta Sorority. The sorority of black women supports local communities around the world.

Franklin’s legs were crossed at the ankles, a symbol that shows that she was a strong, confident woman. She was lying in a gold-plated open coffin with the words “Aretha Franklin the Queen of Soul” embroidered on the fabric inside the lid.

Today, Franklin’s attire was changed to a powder blue and matching pumps.

George Hamilton, the director of the Wright Museum, said that while they are used to serving the public, the events to honor Franklin this past week have been of a magnitude they haven’t experienced. So many details, from water to security, required planning so that the museum could appropriately welcome the crowds.

“There are some challenges in hosting an event for an international jewel of a performer like Aretha Franklin,” he said. “She is, after all, a queen.”

Today, her body will be transported to the New Bethel Baptist Church, which is in the parish where her father was a pastor.

Tonight, “A People’s Tribute to the Queen” – a concert in honor of Franklin – will be held at the Chene Park Detroit Amphitheater. The concert will feature some well-known gospel performers like The Williams Brothers, Owens said.

She said that the family has been trying to balance their need for privacy in mourning their loss while recognizing Franklin’s public life and giving fans a chance to mourn as well.

“We really haven’t not had much of an opportunity to have private moments,” Owens said. “I know the world lost the Queen, but her sons lost their mother, her nieces and nephews lost their aunt.”

“We lost a family member and we haven’t had a chance to come together as a group to truly realize that we have lost one who loved us so much and was so loyal to us.”

The private funeral will be held tomorrow. Afterwards, Franklin’s body will be transported in the same hearse that carried Parks and will be laid to rest at the same cemetery as Parks.

“In the long run, they were both fighting for the same cause, which is freedom,” Seniors said of Parks and Franklin.

“I would want my daughter to know of the people like Aretha Franklin – to be able to listen to that voice… and hear that there is something special about it.”

Cynthia Nixon did well in a debate with Andrew Cuomo, but it’s probably not enough

After 50 years together, these women are finally married. One of them is dead.