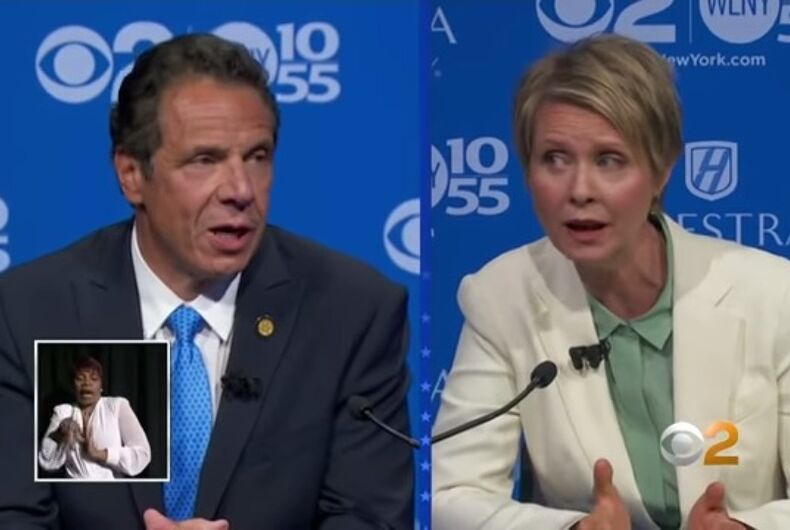 The odds are stacked against Cynthia Nixon in her race against incumbent New York Gov. Andrew Cuomo. But for an hour last night, the bisexual candidate and former Sex and the City actress went head to head in a debate with Cuomo and proved that she was a credible challenger.

That the debate even happened was a benefit to Nixon. Cuomo has largely been ignoring her candidacy even as he’s been shifting to the left to accommodate Nixon’s criticisms of his administration. The last time he faced a progressive primary challenger, in 2014, Cuomo never debated her.

The debate itself was more mudslinging than policy discussion. At one point, an exasperated Cuomo said to Nixon, “Can you stop interrupting?” To which Nixon replied, “Can you stop lying?”

Cuomo’s rejoinder: “As soon as you do.”

In some ways, Cuomo continued his strategy of simply ignoring Nixon. He avoided calling her by name and opened the debate by suggesting he was running against Donald Trump. “No one has stood up to Donald Trump the way I have,” Cuomo said.

While Cuomo tried to portray himself as a seasoned pro at governance, Nixon blasted him as a symbol of the “incredible corruption” in Albany. She held him responsible for the deterioration of New York City’s subway system (Cuomo oversees the agency that runs it) and underscored policy differences on issues such as education funding and public workers’ right to strike.

For his part, Cuomo dismissed Nixon as a political lightweight and hypocrite. He said “you don’t snap your fingers and make it happen.” Cuomo also went after Nixon for having formed an LLC to get paid as an actress, allowing her to get more favorable tax rates.

Related: Cynthia Nixon’s new campaign slogan is ‘Vote for the homo, not for Cuomo’

Leading up to the debate, Nixon had asked that the temperature in the auditorium be set to 76 degrees, saying that keeping the room cold was sexist. Cuomo is famous for turning campaign settings into, as one opponent put it “a meat locker.”

While the request was widely mocked on social media, a 2015 study found that most workplace thermostats were set to accommodate the average male who wears a suit, ignoring the metabolic differences between the sexes.

The Democratic primary is just two weeks away, and Cuomo has lined up endorsements from most political groups. That includes LGBTQ ones, which opted for the governor despite Nixon being one of their own. The political calculus seems to be, go with the winner.

With so little campaign money that she can’t even afford television ads, Nixon needed the debate for visibility. In the end, neither side scored a knock-out blow.

But it did give Cuomo a taste of what it will be like to run for president in 2020, as he’s widely expected to do. He seemed to pooh-pooh that speculation, saying he would serve out his full term as governor. “The only caveat is if God strikes me dead,” he added for emphasis.

The debate also underscored the growing turmoil in the Democratic party between the establishment and its progressive wing. Nixon may not win this time around. But if the progressive wing ever comes to power in New York, her candidacy will have been an important stepping stone.