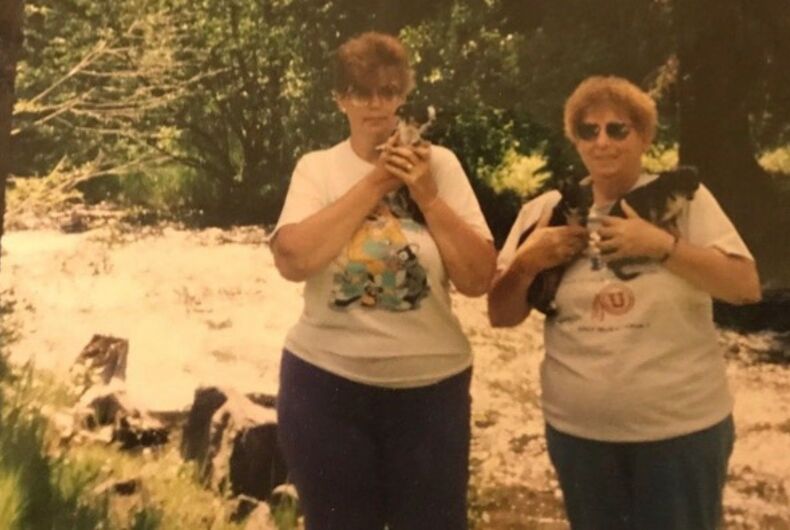 When Bonnie Foerster met Beverly Grossaint at a party in 1968, it was love at first sight. Now, 50 years later, a Utah judge has confirmed what she knew all along: the two were meant to be together.

Foerster was living in New York City with an abusive husband who had broken some of her ribs. She was wearing dark sunglasses to hide black eyes when Grossaint “took off my glasses, looked at me with those deep blue eyes and told me that she could see my soul,” Foerster told The Washington Post. “Just like that, we fell in love.”

The two women were never married. When same-sex marriage was legalized in Utah, the women both had medical issues that made it impossible to wed. Now, three months after Grossaint’s death from pneumonia, the two are finally wives.

“We’d always wanted to, but life kept getting in the way,” Foerster said. “I’m numb with happiness to finally be a married woman.”

Utah does not recognize so-called “common law” marriages, but it will recognize certain relationships  – even posthumous ones – if a judge agrees that the couple were dependent on each other in certain circumstances. Only one other posthumous marriage has been recognized in the state.

The law stipulates that the couple must have lived together, treated each other like they were married, and presented themselves as a couple that could lead people to think they’d been wed. The surviving partner must file a petition with the court within one year of their beloved’s death.

Foerster, who is blind and a double amputee now, told the judge all about “Bonnie and Bev.” She recounted how they met and the time when they walked in New York City’s Gay Pride Parade in 1976. She left her husband and moved in with Grossaint a week after meeting her, she told the judge.

“We were perfect together,” Foerster recalled telling the judge through tears. “I was born for her and she was born for me.”

“When she heard my voice in the room, she asked me to go,” Foerster said as she told the judge about Grossaint’s death, “because she didn’t want me to see her dying. She wanted me to remember the good times, the happy times. But every day was a good time and a happy time with Bevvie. So I stayed.”

She said she told her lifelong love, “I want to thank you for every second of our lives. Every moment that we shared, every argument that we had, every bill that we paid together. I will never forget you. I love you more than words can say.”

“Oh, Bon, I will be waiting for you with open arms, and I will hold you eternally,” Foerster replied before dying.