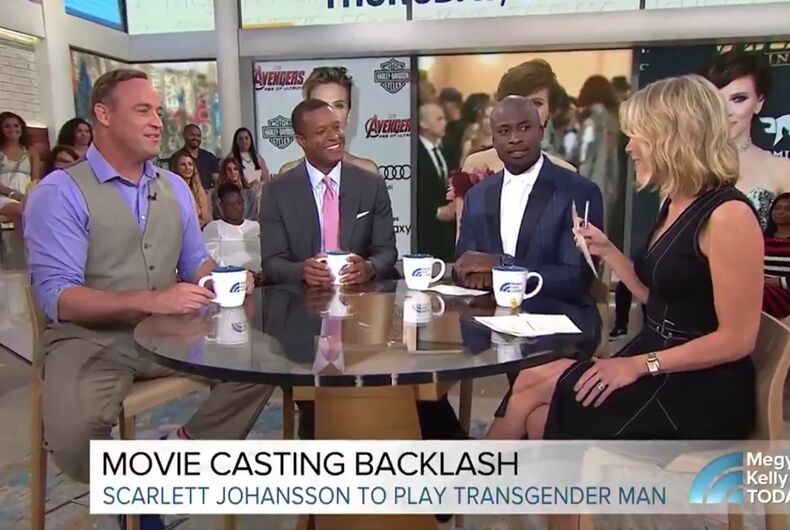 MSNBC put together a panel to discuss Scarlett Johansson’s role as a transgender man in an upcoming film, a casting that has faced fierce criticism for co-opting transgender stories.

The panel itself, though, did not include any transgender people. The irony of a panel of cisgender people discussing how transgender voices aren’t heard was lost on everyone in attendance.

Earlier this week, it was announced that Johansson would play the lead role in a biopic of Dante Gill. Gill, who was assigned female at birth, presented himself as a man, took a male name, and told people to call him “Mr. Gill.”

No one on the panel identifies as transgender. In fact, none of them seemed to know much about transgender issues at all.

The panel started badly with Kelly referring to Gill as a “transgender woman.” She corrected herself moments later, but no one on the panel seemed to even notice her mistake.

Gbaja-Biamila was the first to respond, referring to Gill as “a transgender.”

“To say that all of a sudden that a woman couldn’t play – in an imaginary world of script – couldn’t play a transgender kind of takes from the creativity of Hollywood,” he said.

Iseman then brought up Tom Hanks who played a gay man in Philadelphia, an astronaut in Apollo 13, and… Forrest Gump in Forrest Gump, even though “he wasn’t any of those characters,” as if transgender people don’t understand what acting is and don’t have a specific argument about why cisgender women playing transgender male roles is offensive.

Gbaja-Biamila talked about Felicity Huffman in Transamerica, who he said played “a transgender” and won a Golden Globe. He did not explain why winning an award for that role was important, and he was unaware that that’s part of the entire argument against Johansson: cisgender actors use transgender roles to show that they’re serious actors while denying transgender actors important roles.

Kelly then showed the depth of her ignorance on the topic: “You don’t want the trans community to be told they can’t play cisgender roles.”

Melvin, who was pretty quiet throughout the discussion, got the last word. While making a banal observation, he mentioned “LGBQ… T issues.”

It was a fitting way to end this panel.

‘Panic! at the Disco’ front man Brendon Urie comes out