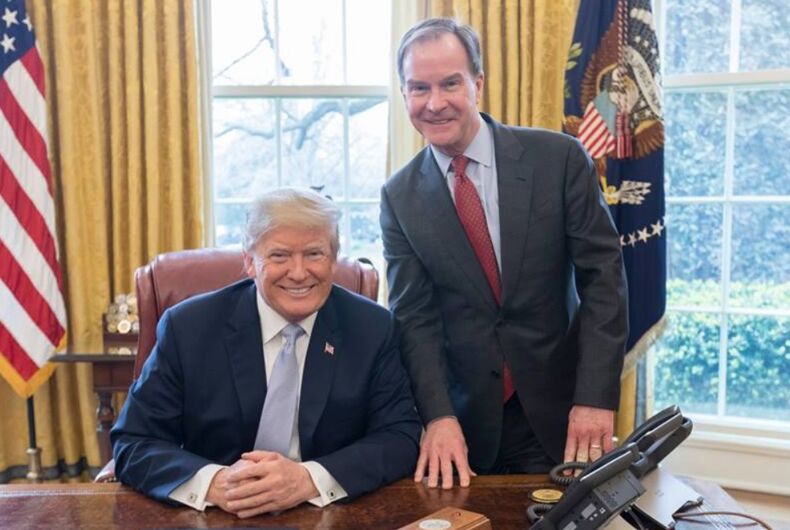 This past May, the Michigan Civil Rights Commission decided that the state’s ban on discrimination on the basis of sex allowed them to investigate discrimination against LGBTQ people.

Attorney General Bill Schuette’s opinion said that the Commission overstepped its authority in May.

The Commission is allowed to interpret state law, but its interpretation is “invalid because it conflicts with the original intent of the Legislature as expressed in the plain language.”

He said that the Commission’s authority “cannot be used to change the statute or to enforce the statute in a way that conflicts with the law’s plain meaning.”

A spokesperson for Schuette said that his opinion is binding on state agencies, but some LGBTQ advocates disagree.

“Once again LGBT Michiganders are going to be the only people in our state who don’t have access to civil rights laws,” said Stephanie White of Equality Michigan. “And that, of course, will be a tragedy.”

White said that Equality Michigan disagrees with his opinion, “and so do the top legal minds in the state who had looked at this.”

The Commission’s interpretation of state law falls in line with several federal court decisions that interpret anti-LGBTQ discrimination as a form of sex discrimination.

Jay Kaplan of the ACLU of Michigan said accused Schuette of cherry-picking federal cases to cite in his opinion and ignoring a key decision from the 6th U.S. Circuit Court of Appeals, which covers Michigan.

In March, that court ruled that a man who fired a transgender woman had engaged in sex discrimination under Title VII, not because he fired the worker for being a woman, but because he fired her for failing to live up to sex stereotypes.

“He wanted to reach the conclusion he reached,” Kaplan said.

Schuette cited the legislature’s refusal to pass bills that would have added sexual orientation and gender identity to the state’s laws.

“This is about an unelected commission making law when the Constitution expressly gives that ability only to the Legislature,” said a spokesperson for Schuette.

Kaplan said that it’s “questionable” whether Schuette’s opinion is binding on the Commission.