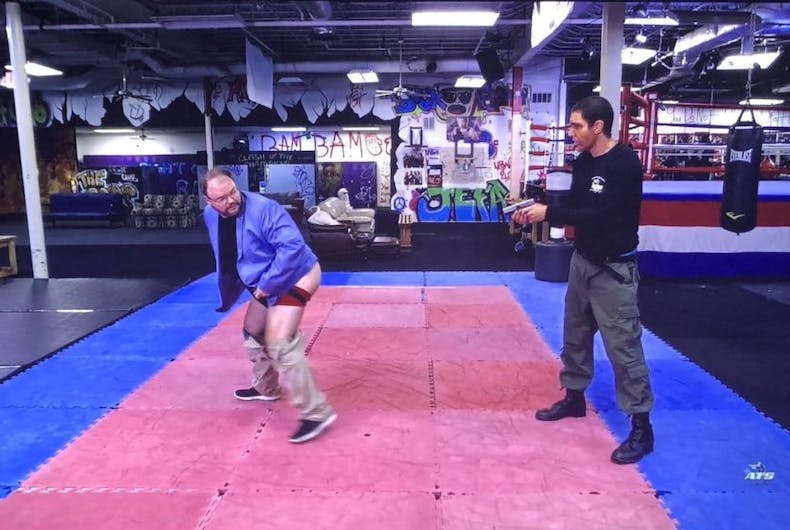 Georgia state representative Jason Spencer flashes his bare butt to Sasha Baron Cohen to show how to "scare terrorists" by pretending to be gay.Photo: Twitter/screenshot

Republican state legislator Jason Spencer probably represented his Georgia district in modern GOP style after being shown on TV hurling the n-word and using racial and antigay stereotypes. And just to top things off, he dropped his pants and showed the world his bare butt.

But surely they can’t be as bad as Spencer’s turn in the spotlight.

Disguised as an Israeli terrorism expert, Cohen gets Spencer to participate in an “anti-terrorism training video.”

Spencer tries to act like an Asian tourist to take up-skirt photos of a Muslim woman in a burqa to “make sure” she’s not a man. Cohen’s character asks Spencer to yell the “n-word” and Spencer obliges over a dozen times.

Cohen looks at Spencer after the legislator finishes screaming and says, “Are you crazy? The ‘N-word’ is noony, not this word, this word is disgusting.”

In another portion of the show, Spencer pretends to be “homo” because terrorists are afraid of gay people according to Cohen. The legislator drops his pants, shows off his bare butt, and runs backwards toward Cohen while screaming “America!”

Brandishing a knife and hacking at a mannequins genitals, Spencer continued with, “We will cut off your dick, you understand? We will take your dick and we will shove it in your mouth. How are you going to rape children and women without a dick?”

Spencer refuses to apologize, saying he was duped into “acting” like a deplorable.

“It is clear the makers of this film intended to deceive me in an attempt to undermine the American conservative political movement,” Spencer said in a statement. He says he’s hired a lawyer and plans to “take action if and when any of this fraudulently obtained footage of me is used by these Hollywood liberals to line their own pockets.”

This will be Spencer’s last term in office. He lost his primary election last May.

This guy screamed the n-word & ‘fa**ot’ at a youth group in McDonalds. Now he’s in jail.