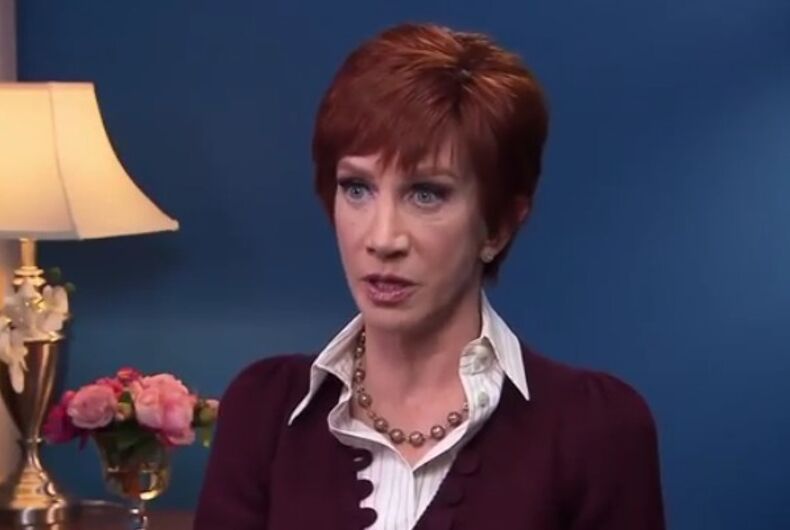 At this point, does it help, or does it hurt?

Was it spontaneous outrage to the administration’s sadistic policies, or is she playing into the Trump Distraction Machine?

And now that she’s resurrected her career after the severed-Trump-head photo, does the outburst give her more momentum? Or is she using Robert De Niro’s “Fuck Trump” for cover?

The outrage over the administration’s immigration policy of forced separation of children from parents boiled over as the weekend progressed. Even former First Lady Laura Bush shared her disgust with the policy, and all former First Ladies have since weighed in against it.

But when the White House learned of Bush’s plan, it crafted a preemptive response credited to current First Lady Melania Trump — a multi-purpose salad statement that feigned dislike of the policy and blamed both Democrats and Republicans for it, even though it’s a Trump-specific interpretation of immigration law.

The White House statement: “The First Lady hates to see children separated from their families and hopes both sides of the aisle can finally come together to achieve successful immigration reform. She believes we need to be a country that follows all laws, but also a country that governs with a heart.”

The words themselves aren’t likely those of Melania, a sometimes-reclusive First Lady battered by her husband’s infidelities, but herself a beneficiary of the immigration policies her husband now attacks.

Yet the White House statement prompted Griffin to tweet-fire back, with a nod to Trump’s own misspelling of his wife’s name — “Fuck you, Melanie. You know damn well your husband can end this immediately … you feckless complicit piece of shit.”

It’s become a familiar if occasionally uncomfortable pattern with Griffin. When Tyler Shields, a photographer known for controversy, posed Griffin with what appeared to be a bloody, severed Trump head in May 2017, the photo did more than shock. It drew resounding criticism from right and left.

CNN dropped Griffin from the Anderson Cooper New Year’s Eve duo, and Griffin eventually apologized. But she later took back the apology, fought back and rebuilt her career.

Yet, Griffin is no longer a voice in the wilderness, and, by no means, does she offer the only sharp criticism of Trump and the silently complicit Republicans.

Her latest outburst follows a high-profile F bomb at the Tony Awards on June 10. Legendary actor Robert Di Niro launched an impromptu “Fuck Trump” that lifted the audience in a standing ovation.

Afterward, the predictable chorus of “hell yeahs” and “how dare he’s” resounded across the land. Director and advocate Rob Reiner was among those who called Di Niro counterproductive.

“If you have any interest in trying to preserve the democracy, and put it in the hands of somebody who understands government, who isn’t self-dealing, who cares about this country and the people in this country, then you’re helping Trump,” Reiner said on the Rising TV show.

So does Griffin help, or does she hurt? Likely both.

Regardless, we’d better buckle up, folks. Protest is never comfortable, and we have far to go.