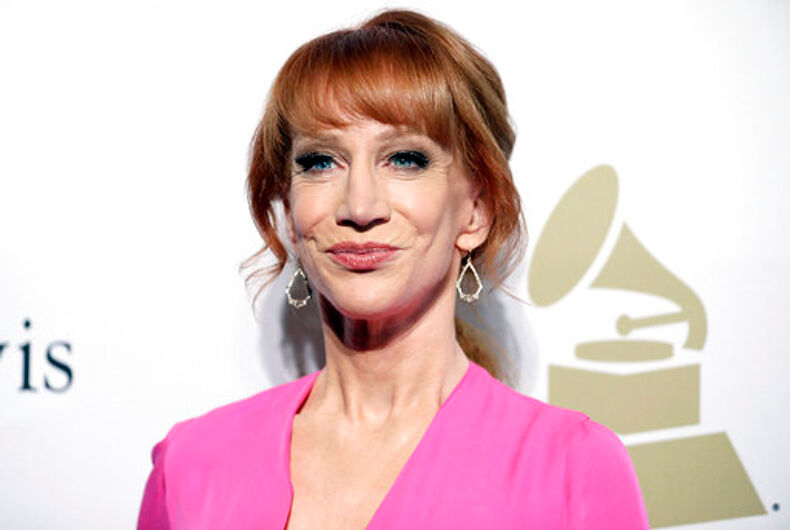 FILE - In this Feb. 11, 2017 file photo, comedian Kathy Griffin attends the Clive Davis and The Recording Academy Pre-Grammy Gala in Beverly Hills, Calif. Griffin says she knew her new photo shoot with photographer Tyler Shields would “make noise.” She appears in a photo posted online Tuesday, May 30, 2017, holding what looks like President Donald Trump’s bloody, severed head. Many on Twitter called for the comedian to be jailed. Griffin told photographer Shields in a video on his Twitter page Tuesday that they will have to move to Mexico to avoid federal prison for their latest collaboration.Photo: (Photo by Rich Fury/Invision/AP, File)

Kathy Griffin says she went way too far when she appeared in a brief video Tuesday holding what looked like President Donald Trump’s bloody, severed head.

The comic apologized later for the video image, saying it was “too disturbing” and wasn’t funny.

“I sincerely apologize,” she said in a second video. “I went way too far. The image is too disturbing. I understand how it offends people.”

The first video showed a straight-faced Griffin slowly lifting the bloody head. She originally described the project with photographer Tyler Shields as an “artsy fartsy statement” mocking the commander in chief.

Many online called for Griffin to be jailed.

In her apology video, Griffin begs her fans for forgiveness and says she has asked the photographer to remove the images.

The video had apparently been removed from Shields’ blog by late Tuesday.

“We are pleased to see she has apologized,” CNN said in a statement. “We are evaluating New Year’s Eve and have made no decisions at this point.”

Squatty Potty, a Utah-based bathroom products company, said in a statement Tuesday that it has suspended an ad campaign featuring Griffin.

Trump, however, says celebrity Kathy Griffin “should be ashamed of herself.” In a post on his Twitter account Wednesday morning, the president says, “My children, especially my 11-year-old son, Barron, are having a hard time with this. Sick!”

A publicist for Shields did not respond to a request for comment.

The Secret Service has announced it will investigate the incident. The agency is tasked with looking into anything that might resemble a threat to the president’s life.

LGBTQ Nation made an editorial decision not to show the tasteless image and video yesterday.

Japanese brides celebrate their love with an epic Disney wedding