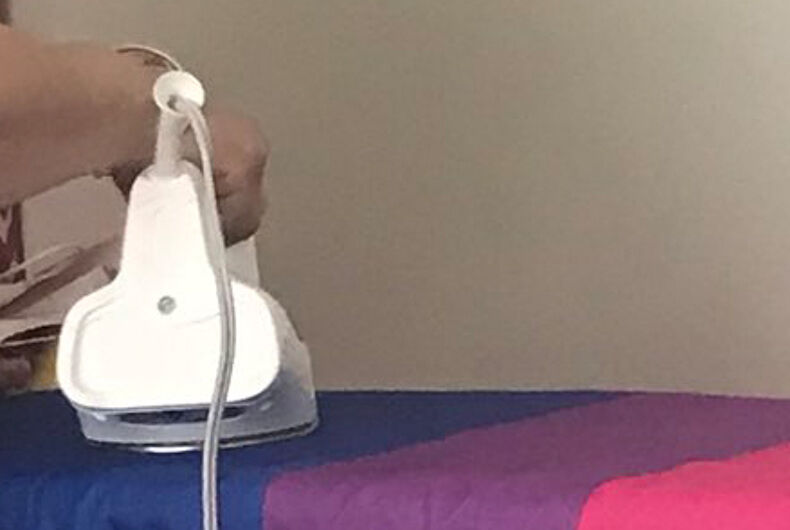 Lexie, a young bisexual woman, was getting ready to spend the day at DC Pride, when a most unexpected and wonderful thing happened.

“I got up this morning to get ready for #DCPride,” Lexie posted on her Twitter account. “My grandma walked into my room, looked at my bi flag, and said, ‘Oh, this needs to be pressed out!’ Such a simple gesture, but it holds so much love and meaning for me.”

I got up this morning to get ready for #DCPride. My grandma walked into my room, looked at my bi flag, and said, “Oh, this needs to be pressed out!” Such a simple gesture, but it holds so much love and meaning for me. pic.twitter.com/stiD3vg5vs

The picture, a simple but important display of love and acceptance, quickly went viral, with over 34,000 retweets and 243,000 likes.

The comments were deeply touching, with many others sharing their own grandparent stories.

A user, Erika aka @ninjadinosailor, had accidentally come out as bisexual on social media. “I didn’t know it would show up on my Facebook,” she said, “but my Nana texted immediately saying she loved me for who I was no matter my orientation. She’s the only family of mine to accept it and not dismiss it.”

Another, @raamatuid, talked about their grandparents reaction to them coming out as nonbinary.

“I came out as nonbinary last year and told my grandparents about my pronouns.” they said. “For my birthday, they called me and sang ‘Happy Birthday to They’ and it was the sweetest thing. It’s so good to feel loved and seen.”

Also, a young Hawai’ian trans man with the username @voidce spoke about the importance of little gestures like this, and shared a similar story of their own.

“Not long after I came out to my grandpa, we met up for a family dinner and he pulled me aside to give me a men’s polo shirt he’d bought for me while he was on a trip, said @voidce.

“It was way too big for me and very much not in style, but it meant he accepted me as a trans man and that’s a memory that I’ll cherish forever”

For Erika, her grandmother’s simple gesture meant even more, as she had originally feared coming out to her.

“It took me years to come out to her out of fear that she would see me differently, but nothing changed,” said Lexie. “She said, ‘Okay, that’s fine.’ She taught me to love and accept all people, and she has always been supportive of me.”

She also decided she needed to share another photo of her grandmother, after such an outpouring of love all over her Twitter feed.

“Here’s another picture of my grandma because I want the world to see how beautiful she is,” said Lexie. “Show her some love!”

WOW this is blowing up so here’s another picture of my grandma because I want the world to see how beautiful she is! Show her some love! Happy pride y’all 💖💜💙 pic.twitter.com/PytLQtipoo

Not all the comments were as touching as the above, and some responded in humor. The best of these was clearly by a user by the Twitter handle of @ThisIsHog who cut the mood with a little sharp wit, saying, “for once I can like a story involving a relative trying to help someone be straight.”

Is Kathy Griffin just picking a fight or actually helping the resistance?