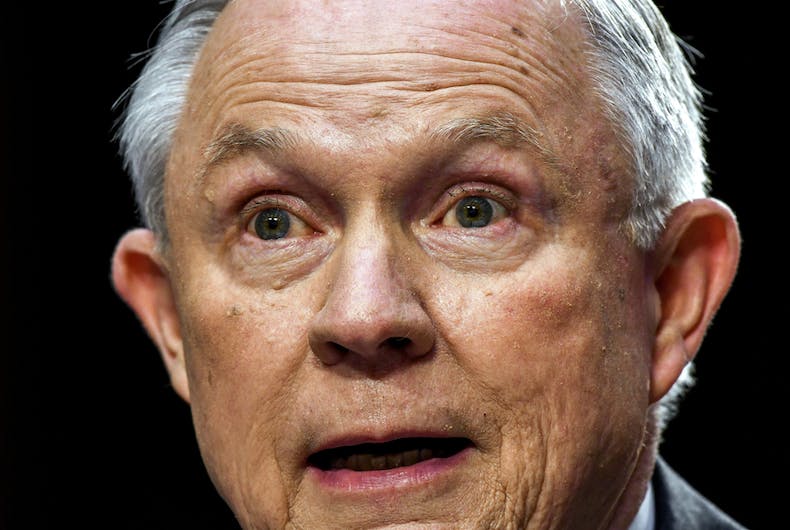 US. Attorney General Jeff Sessions responds to questions from one of the members of the Senate Intelligence Committee during his testimony in front of the Committee. Washington DC, June 13, 2017.Photo: Shutterstock

Over 600 United Methodist clergy and lay members are bringing charges against Attorney General Jeff Sessions in church court on charges of “immorality,” “child abuse,” and violating church doctrine. Sessions could be expelled from the denomination if found guilty by church authorities.

640 members have brought church law charges against Sessions for his role in enforcing a “zero tolerance” immigration policy that is tearing thousands of migrant children from their parents. The church says Sessions’ invocation of scripture to justify his disgusting attacks on undocumented immigrants was the tipping point.

“Specifically, the group accuses him of child abuse in reference to separating young children from their parents and holding them in mass incarceration facilities; immorality; racial discrimination and ‘dissemination of doctrines contrary to the established standards of doctrines’ of The United Methodist Church,” the church posted on its website.

“I really never would have thought I’d be working on charges against anybody in the Methodist connection, much less a lay person,” said the Rev. David Wright, a Pacific Northwest Conference elder and chaplain at the University of Puget Sound in Washington State, and organizer of the effort to charge Sessions, said in a news release from the church.

The Rev. William Lawrence, professor emeritus at Perkins School of Theology and an authority on Methodist history, cautioned that the charges may not get very far because Sessions isn’t a minister. The first step in the process would be for the pastor of Sessions’ home church in Mobile, Alabama to “counsel” the Attorney General on why his behavior is decidedly not Christian.

“I’m not aware of any circumstance in the 50-year history of The United Methodist Church when a complaint against a lay person moved beyond the stage of its resolution by a district superintendent or a pastor,” he said.

“I hope his pastor can have a good conversation with him and come to a good resolution that helps him reclaim his values that many of us feel he’s violated as a Methodist,” Wright said. “I would look upon his being taken out of the denomination or leaving as a tragedy. That’s not what I would want from this.”

Bishop David Graves of the Alabama-West Florida Conference wouldn’t speak about the charges, but he did release a statement about Sessions’ order for immigration agents to steal children from their parents.

“I implore Congress and the current administration to do all in their power to reunite these families,” he said. “Changes to these laws need to be addressed starting today. Let us join our voices in prayer for the separated families, for those working to end this injustice and for our nation’s leaders.”

The Rev. Susan Henry-Crowe, top executive of the United Methodist Board of Church and Society, issued a statement on behalf of the church that excoriated the policy and Sessions’ attempt to justify the nightmare inflicted on migrants.

“To argue that these policies are consistent with Christian teaching is unsound, a flawed interpretation and a shocking violation of the spirit of the gospel,” she said in a statement.

Former First Lady Laura Bush sharply criticized the administration yesterday in an op-ed in the Washington Post. Both she and former President Bush are Methodists.

Free binders for trans people? This group is making it possible.