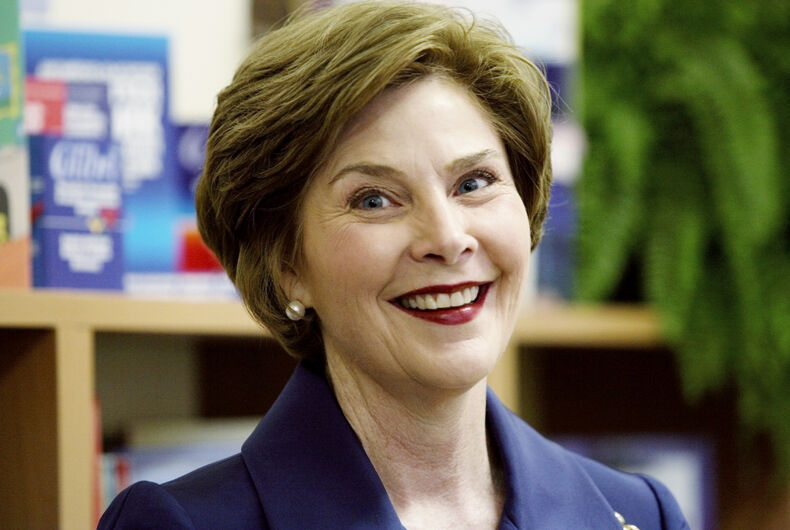 Former First Lady Laura Bush is not known for her forcefulness or political stances. But President Donald Trump’s deplorable practice of forcefully separating migrant children from their parents has her coming out swinging.

In an op-ed for the Washington Post, one of Trump’s most hated newspapers, Bush calls his decision to house thousands of children in an abandoned Walmart “shameful” and “immoral.” She describes the horrific conditions they’re suffering and ties Trump to some of the darkest periods of American history.

And she’s right. Every single word is right.

“I live in a border state. I appreciate the need to enforce and protect our international boundaries, but this zero-tolerance policy is cruel. It is immoral,” Bush writes. “And it breaks my heart.”

“Our government should not be in the business of warehousing children in converted box stores or making plans to place them in tent cities in the desert outside of El Paso. These images are eerily reminiscent of the Japanese American internment camps of World War II, now considered to have been one of the most shameful episodes in U.S. history.”

Bush cites the news that the children’s caretakers had been instructed not to touch the children or pick up babies to comfort them.

She then invokes the memory of former First Lady Barbara Bush’s trip to a home for children with AIDS where she famously embraced a dying baby at a time when most people were still afraid to touch someone infected.

“Back then, at the height of the HIV/AIDS crisis, the disease was a death sentence, and most babies born with it were considered ‘untouchables’.” She writes.

“During her visit, Barbara — who was the first lady at the time — picked up a fussy, dying baby named Donovan and snuggled him against her shoulder to soothe him. My mother-in-law never viewed her embrace of that fragile child as courageous. She simply saw it as the right thing to do in a world that can be arbitrary, unkind and even cruel.”