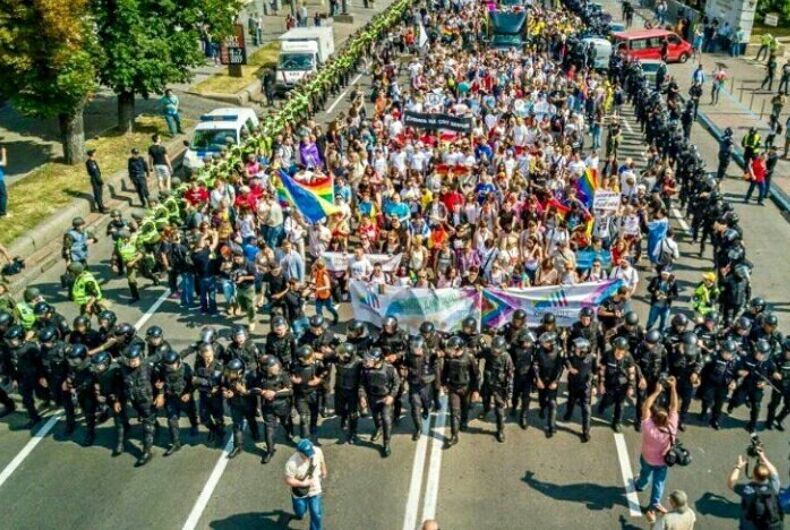 Just three years ago, the Kiev Pride parade was called off when right-wing activists attacked the 300 participants with smoke grenades and injured more than a dozen.

Sunday’s outcome in the Ukrainian capital, though, was far different.

Thanks to the Ukraine government’s newfound support of civil rights, a wave of police officers removed right-wing protesters who had blocked the parade route. When they resisted and fought police, 56 right-wingers were detained, according to the Agence France-Presse news agency.

This year’s numbers from Kiev, with 2.8 million people, make the turnaround even more impressive. Joining its Pride parade were an estimated 5,000 LGBTQ people and allies, including U.S. Ambassador Marie L. Yovanovitch, at the front. Protecting them were 5,000 police officers.

The 150 right-wing protesters didn’t stand a chance. A dramatic drone video shows the police methodically surrounding the protestors, who then fought police before the arrests.

The Kiev police presence stands in contrast with other locations, like Toronto, where LGBTQ people have an uneasy relationship with law enforcement. After a string of gay murders were not investigated, Toronto parade organizers asked police not to wear uniforms in its June 24 parade.

But one Pride marcher, a 19-year-old named Liza, noted how the police presence was still necessary at this point in Kiev.