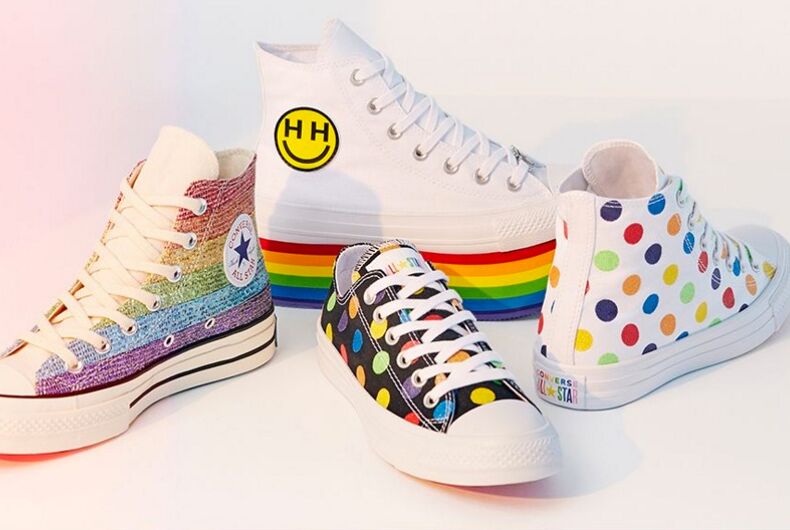 Converse, and specifically the Converse Pride Employees Network, likes to make pride a big thing. This year, they’ve asked Miley Cyrus to help out, and the performer has stepped up, designing the popular shoe brand’s Pride Collection.

Many of the items feature the logo of Cyrus’s Happy Hippie Foundation. The foundation, as well as Minus 18, RainbowYOUTH, the It Gets Better Project, and others will split the net profits from sales of the attire.

The items are being sold on Converse’s website and selected retailers.

Cyrus, the daughter of country singer Billy Ray Cyrus, made a name for herself in the 2000s as the star of Hannah Montana on The Disney Channel.

She then shed her kid-friendly persona via a number of controversial actions, including a performance with Robin Thicke at the 2013 MTV Video Music Awards that shocked audiences with its overt sexuality.

The performer identifies as pansexual and gender fluid.

“I am literally open to every single thing that is consenting and doesn’t involve an animal and everyone is of age. Everything that’s legal, I’m down with. Yo, I’m down with any adult — anyone over the age of 18 who is down to love me,” she was quoted in 2015 in Paper magazine.

Cyrus was inspired by the death of Leelah Alcorn to found the happy Hippie Project in 2014. The Project is a nonprofit seeking to rally young people to fight injustice facing homeless youth, LGBTQ youth, and other vulnerable populations.

“People who say WE can’t change the world ARE wrong,” starts the Happy Hippie manifesto, provided on their website. “We will make some noise and cause a scene! We will challenge each other and the world & will stop pointless judgment.”

Converse has done more than just fashion this year. They’ve also worked with several artists and illustrators to create beautiful posters conveying a message of hope and love.

Designers involved include Liam Donnelly, Rooney, and Ionut Radulescu. Converse has provided the poster art on their website, for users to download and print.

They are also encouraging users to share picture of them with the art, using the hashtag #prideposterproject.

Is Kathy Griffin just picking a fight or actually helping the resistance?