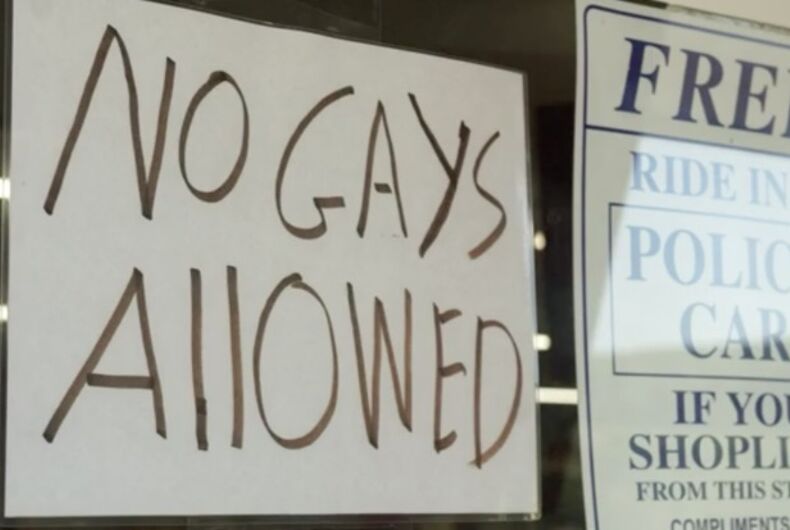 The sign Jeff Amyx posted in the window of his hardware store is being widely criticized for the sheer bigotry.Photo: WBIR/Screenshot

Jeff Amyx, the owner Amyx Hardware & Roofing Supplies in Grainger County, Tennessee, wants everyone know he doesn’t like gay people. In fact, he doesn’t even want LGBTQ people shopping in his store.

Back in 2015, Amyx made national headlines for hanging a “NO GAYS ALLOWED” sign in his shop window to show is displeasure with the Supreme Court ruling in favor of marriage equality. He eventually replaced it with a sign reading, “We reserve the right to refuse service to anyone who would violate our rights of freedom of speech & freedom of religion.”

The attention-seeking homophobe, who’s also a Baptist minister, decided to put his bigotry back on display following the Supreme Court’s decision in favor of a baker who didn’t want to make a cake for a gay couple in Masterpiece Cakeshop v Colorado Civil Rights Commission.

What he doesn’t seem to understand, however, is that decision doesn’t give businesses a license to discriminate against LGBT people. In fact, it says the exact opposite.

The majority opinion expressly said that laws prohibiting discrimination are necessary and appropriate. Instead, it sent the case back in a narrow decision that focused on whether or not commissioners had showed bias against his religion in correspondence with each other.

“There’re two very important constitutional issues here at least. On one side, you’ve got equality. It actually came to us in the form of a state statute, but still the idea is that the law has to treat everyone equally. On the other side, you’ve got the freedom of religion and freedom of expression,” Stewart Harris, associate director of the Abraham Lincoln Institute for the Study of Leadership and Public Policy at Lincoln Memorial University told a local radio station.

“Of all those issues, the only one they even sort of tangentially addressed was free exercise of religion.”

Still, Amyx isn’t about to let reality step between his bigotry and business model.

“Christianity is under attack. This is a great win, don’t get me wrong, but this is not the end, this is just the beginning,” Amyx told WIBR. “Right now we’re seeing a ray of sunshine. This is ‘happy days’ for Christians all over America, but dark days will come.”

From Jim Crow to gay cakes: The Trump administration’s war on civil rights