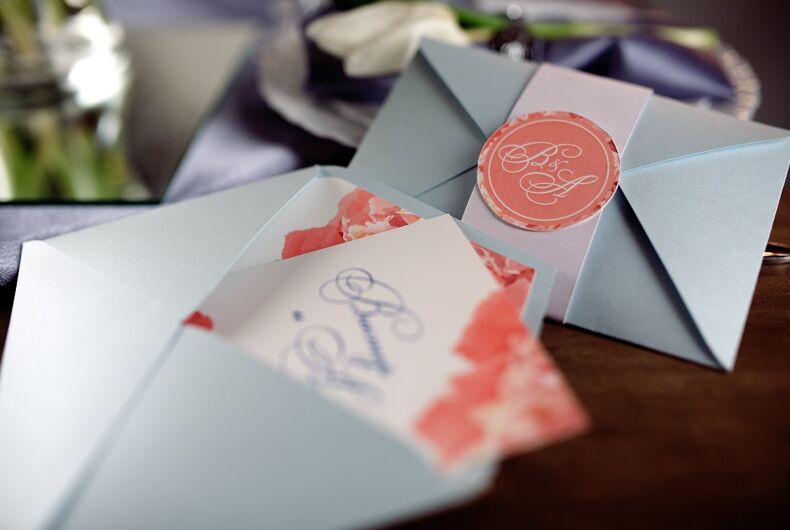 An appeals court in Arizona just ruled against a stationery store’s legal challenge to a local anti-discrimination law.

In 2016, Brush & Nib sued Phoenix, arguing that the city’s ban on discrimination violated the company’s freedom of speech.

Among other services, the newly-formed store wanted to print wedding invitations… but only for straight couples. The store’s owners also wanted to post a sign saying that they refuse to serve same-sex couples.

No same-sex couple had asked Brush & Nib for invitations at that point. But co-owners Joanna Duka and Breanna Koski said that they were “devout Christians” who wanted to overturn the civil rights law before any complaints could be filed against them.

A state court of appeals just ruled that Phoenix’s anti-discrimination ordinance does not violate anyone’s free speech, since it advances a legitimate government interest by prohibiting conduct, not speech.

“While such a requirement may impact speech, such as prohibiting places of public accommodation from posting signs that discriminate against customers, this impact is incidental to properly regulated conduct,” wrote Judge Lawrence Winthrop for the court.

“Simply stated, if appellants, as an economic entity, want to operate their for-profit business as a public accommodation, they cannot discriminate against potential patrons based on sexual orientation.”

“What appellants cannot do is use their religion as a shield to discriminate against potential customers,” Winthrop wrote.

Duka and Koski argued that the civil rights ordinance forced them to “speak in favor of same-sex marriages.”

Winthrop said that the law does no such thing. The store owners are free to “post a statement endorsing their belief that marriage is between a man and a woman” or “post a disclaimer that the act of selling their goods and services to same-sex couples does not constitute an endorsement of their customers’ exercise of their constitutional right to marry.”

In other words, they can have their opinion and tell everyone they want about their opinion, so the law isn’t violating their freedom of speech.

Duka and Koski were represented by the Alliance Defending Freedom, which decried the ruling in a statement. “Artists shouldn’t be forced under the threat of fines and jail time to create artwork contrary to their core convictions,” the statement read.