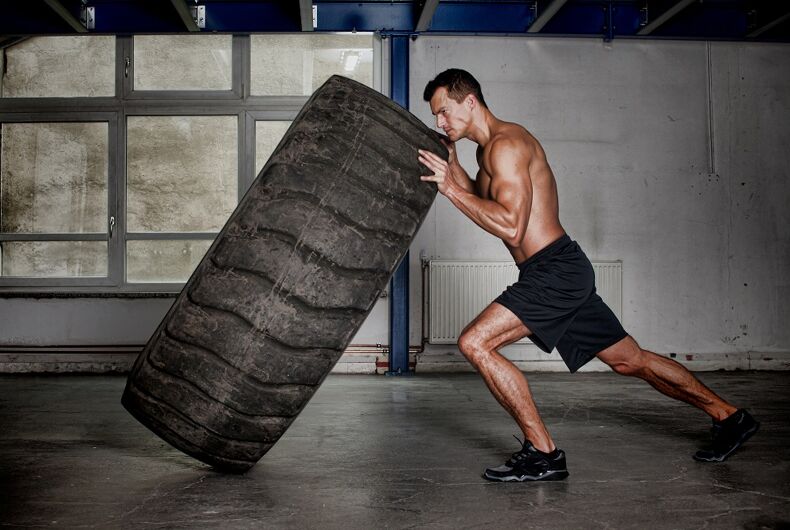 Yesterday, LGBTQ Nation reported that employees and members of Crossfit Infiltrate in Indiana quit after the owners canceled a Pride Month workout and made anti-LGBTQ comments.

Now a national CrossFit spokesperson was fired after he made comments on Twitter supporting the gym owners’ homophobic stance.

Last week, CrossFit Infiltrate in Indianapolis canceled a special workout a member organized for Pride Month. The business closed hours after news of the gym’s homophobia hit the media and social media lit up in condemnation.

In an email to the member, the gym’s director and owner wrote, “We believe that true health forever can only be found within humility, not pride. Humility is seeing oneself as they truly are, and as God truly defines them to be.”

Coaches and gym members quit after the cancellation came to light. One of the members told local media that she didn’t want to be associated with a gym that discriminates.

Russell Berger, who works for the national CrossFit brand as their “Chief Knowledge Officer,” posted several messages on Twitter in support of the gym’s owners.

“As someone who personally believes celebrating ‘pride’ is a sin, I’d like to personally encourage #CrossFit Infiltrate for standing by the convictions and refusing to host an @indypride workout,” Berger wrote. “The intolerance of the LGBTQ ideology toward any alternative views is mind-blowing.”

He also said that the LGBTQ movement is “an existential threat to freedom of expression.”

He has since deleted the tweets, but OutSports had already taken screenshots.

Effective immediately, Russell Berger has been placed on unpaid leave while management completes a thorough review.

“He needs to take a big dose of ‘shut the fuck up’ and hide out for awhile. It’s sad,” Glassman said.

“We do so much good work with such pure hearts — to have some zealot in his off-time do something this stupid, we’re all upset. The whole company is upset. This changes his standing with us. What that looks like, I don’t know. It’s so unfortunate.”

Berger said that he’s an “Orthodox Christian” pastor (it is unclear if he is referring to the Eastern Orthodox Church or if he meant that he’s a fundamentalist Protestant) and that he often posts his personal views on his personal Twitter account. He said that these tweets were “nothing I haven’t said before on social media.”

He said that what was different this time is that his tweets were misinterpreted. He wasn’t speaking for CrossFit, but just for himself.

“It became way too difficult to discern between me making statements of personal opinion, and me speaking as a voice for CrossFit,” he said.

“My actual point I was making, I still affirm it,” he said.

On Twitter, CrossFit said that it supports diversity and that Berger’s statements don’t represent the company’s views.

CrossFit is a diverse community in every way, and that’s what makes us strong. No matter who you are, how you’re built, what you believe, or who or how you love—we are proud of you.

CrossFit then tweeted that Berger had been fired.

The statements made today by Russell Berger do not reflect the views of CrossFit Inc. For this reason, his employment with CrossFit has been terminated.

As for the Indianapolis gym itself, a reporter with RTV6 posted images on Twitter showing that the gym “will no longer operate its business at this location.”

A Republican who filmed herself harassing a trans woman lost her election. By a lot.