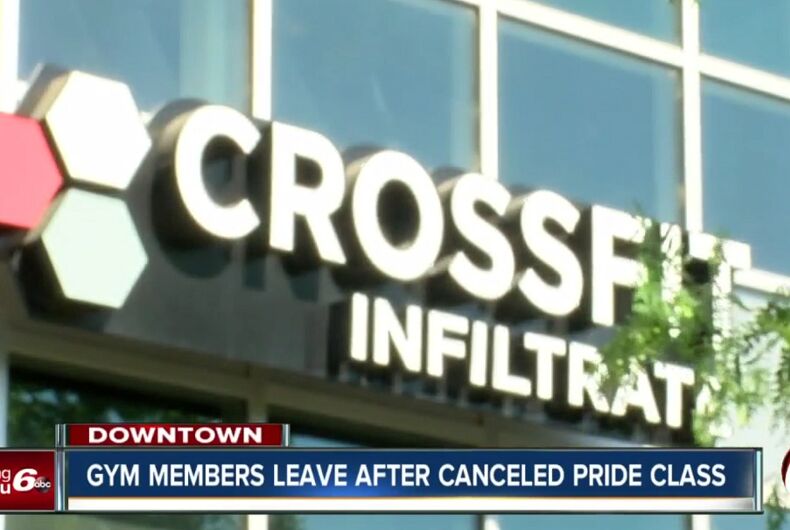 People are quitting a gym in Indianapolis after it canceled a Pride workout.

CrossFit Infiltrate member Ryan Nix said that he planned a special workout last week for Pride Month, but he received an email saying that the workout was canceled.

“We emailed the owner since it seemed that there was an issue with people who may be LGBT,” Nix wrote on Facebook in a message that has since been made private. “You can see from his response that there is…. Please tell your friends not to join this place.”

Brandon Lowe, the director and owner of CrossFit Infiltrate, told Nix that the gym was for “total health,” and that pride prevents people from seeing themselves “as God truly defines them to be.”

Our underlying goal for the staff and members at CrossFit Infiltrate and our other gyms CrossFit White river and University Ave CrossFit is total health and well-being for the individual and community. Total health involves the body, the emotions, relationships, and the spirit. At the foundational detractor from health, as we believe God sets the parameters for, is pride. We believe that true health forever can only be found within humility, not pride. Humility is seeing oneself as they truly are, and as God truly defines them to be. As a business we will choose to deploy our resources towards those efforts and causes that line up with our own values and beliefs.

Of course we will continue treat anyone and everyone with the same respect and provide the same service at CrossFit Infiltrate to anyone that wishes to take part.

In a statement, the gym’s owners said it “has a history of welcoming and serving people training to be fit.”

“The gym never has and never will be anything but welcoming to all human beings who live, move and breathe and God’s world.”

That’s not how members see it.

Becca Kimball, who canceled her membership, told RTV6, “It’s been a fabulous community. I’ve been here for a year and a half.”

But she didn’t want to be part of a gym that discriminates. “I quit my membership within an hour of receiving the email. I didn’t wanna be associated with a discriminatory organization.”

Several of the former employees will be offering the canceled workout on Thursday at an outdoor space.

Editor’s note: A previous version of this story incorrectly identified Brandon Lowe as the general manager of CrossFit Infiltrate. Lowe is actually the director and owner.