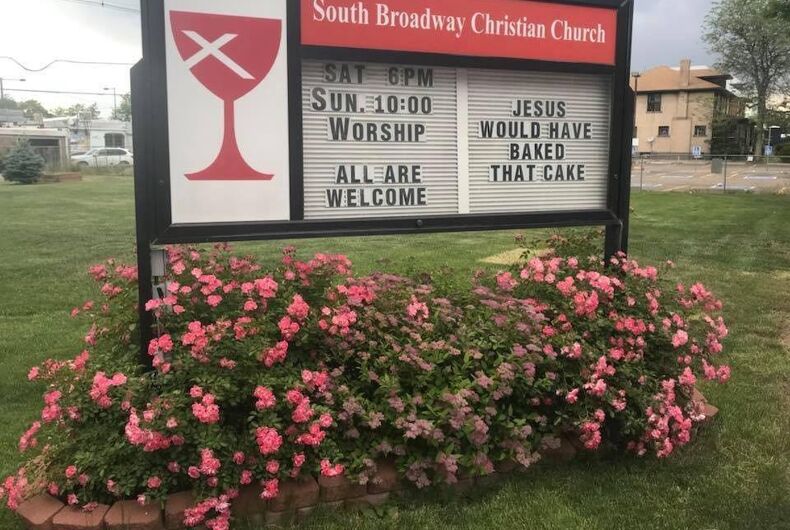 Denver's South Broadway Christian Church has the community in an uproar with their pro-LGBTQ church sign.Photo: Reddit/reyrey5280

In a narrow ruling, the court ruled in favor of Phillips, saying the civil rights commission didn’t respect his claim that he was discriminating for Jesus by refusing to make a cake for a gay couple.

The baker’s store is located in Lakewood, and is part of the Denver metropolitan area.

The church’s pastor, Dustin Adkins, however, disagrees with Phillips logic and, as an empathetic man of God, he would seem to be an authority. Adkins points to the Bible’s recounting of Christ’s life as the basis for his stance that the Christian savior would embrace LGBTQ people.

“Jesus worked with folks on the periphery of society, mistreated and marginalized,” Adkins told television station KUSA. “Those folks are the ones he welcomes the most.”

Phillips claimed his religious freedom was being suppressed by forcing him to serve the public equally. The Supreme Court punted on whether or not “religious liberty” includes a license to discriminate against LGBTQ people, instead they sent the case back for reconsideration. The commission could still resolve the case in favor of the gay couple.

this pic of a sign (📷 by: reyrey5280 from Reddit) from a Denver church near me really says a lot of things, and this is…

Antigay thugs burned down Warsaw’s rainbow statue. So they made it indestructible.

Trump treats our allies like he treats his wives & mistresses