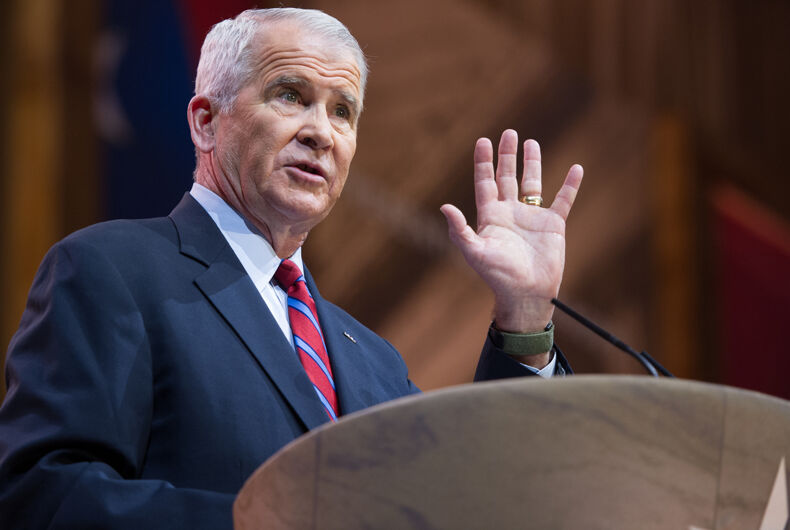 The National Rifle Association has made board member, Fox News contributor, and disgraced former Marine Corps officer Oliver North the organization’s new president. North brings to the office his experience in foreign arms sales and his long history of anti-LGBT statements.

“In the 1850’s a political party was born on the idea of a great moral issue, human bondage, the abolition of slavery in America,” North said. ” If we as conservatives cease to be a place where people of faith and those who believe in strong moral values can come, we will cease to be a political force in America.”

In a 2015 appearance on Fox News, North disparaged female and transgender soldiers as “radical social experiment.”

During a 2010 appearance on Sean Hannity’s Fox News show, North warned that “NAMBLA members” were next if gays were allowed to serve in the military. In another video, North claimed that repealing “Don’t Ask, Don’t Tell” would lead to “a whole lot fewer voluntary enlistments” and a reinstatement of the draft.

At a 1993 GOP fundraiser in Virginia, North “told the crowd that he tried to telephone [Bill] Clinton, but the White House switchboard wouldn’t let him through until he disguised his voice with a lisp.” When a local LGBTQ group demanded an apology, North responded, “If it angered some subset, that’s their problem.”

The NRA itself has a long history of attacking LGBT people.

Given his record, North ought to fit right in at the NRA.

Will New York’s next Attorney General be a gay black man?