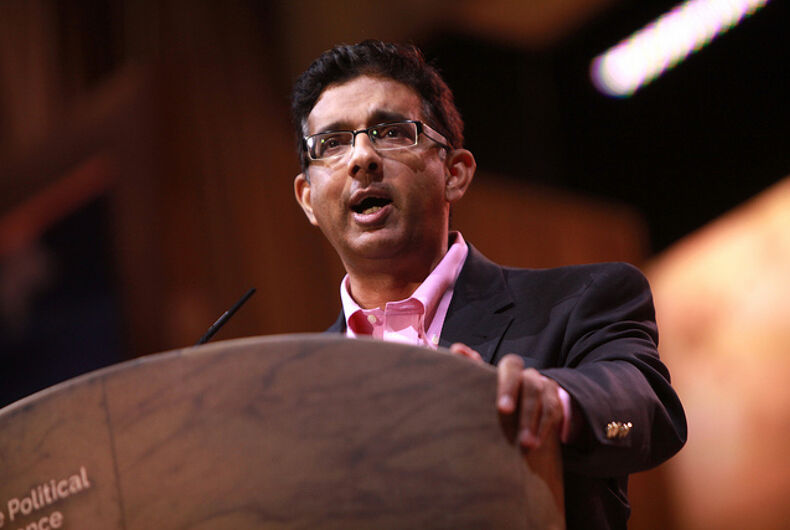 Proving that there is no bottom to the barrel that he is willing to scrape, Donald Trump has announced that he will be pardoning homophobic conspiracy-theorist Dinesh D’Souza, who pleaded guilty in 2014 to a felony charge related to illegal campaign contributions.

“He was treated very unfairly by our government,” Trump tweeted. If by “unfairly,” Trump means that D’Souza acknowledged getting other people to pose as donors to a campaign so that D’Souza could exceed the legal contribution limit, then the president is correct.

D’Souza is the perfect candidate for a Trump pardon. (Sheriff Joe Arpaio was another ideal Trump pick.) For years, he’s been rejected within conservative circles as just too loony even by the Republican party’s relaxed standards.

He insisted that the left was the root cause of 9/11 and that President Obama was indoctrinated in anti-colonialism and socialism by his Kenyan father (whom Obama met once). He parlayed that last crackpot theory into not one but two “documentaries,” which rank among the highest grossing documentaries ever.

But in the era of Trump, fringe theories are now the mainstream. D’Souza is just a better-educated version of the President himself, who started his political career by insisting Obama wasn’t born in the U.S.

Of course, there’s a vicious strain of homophobia in D’Souza’s career.

He started out at Dartmouth in the early 1980s, as editor of the right-wing student publication, Dartmouth Review. There he maliciously outed gay students by publishing personal letters that he denied were stolen. At least one student contemplated suicide as a result of being outed.

Since leaving  Dartmouth, D’Souza has continued assault on LGBT rights.

He has suggested that the reason why Muslims in the Middle East are angry with the U.S. is because of marriage equality, implying that the LGBT community is responsible for terrorism directed at this county.

He said that if gays were allowed to serve in the military, the only advantage would be, should the U.S. lose a battle, “we could always laugh off the defeat and say, ‘Well, yeah, but you only beat a bunch of gays.’”

He has attacked same-sex couples who want to marry as being no different than “the fellow who wants to walk down the aisle with his poodle on the grounds that ‘I love my dog and my dog loves me.‘”

At the same time, D’Souza hasn’t exactly been a model of morality himself. There’s his felony conviction, for one. But there’s also his own disregard for traditional marriage, which he purports to treasure so much.

In 2012, D’Souza showed up at a Christian conference with a woman 20 years younger than himself, whom he introduced as his fiancé. Trouble was, D’Souza was still married, as was the fiancé.

Moreover, he shared a hotel room with his “fiancé,” although he reassured organizers “nothing happened.” (Lucky her.)

As a result, D’Souza was forced to resign as president of King’s College, a Christian right school in New York, which must have hurt, since he was supposedly pulling down $1 million in the job, or about $2,500 per student.

Of course, that kind of behavior is just the thing to endear him to Trump even more. Now you can fully expect D’Souza to rev up his career even more (he never went away) as the man whom the government couldn’t silence.

As for the crime itself–don’t expect D’Souza to take any responsibility. That’s for other people.

People who think gay people are born that way support gay rights. Why?