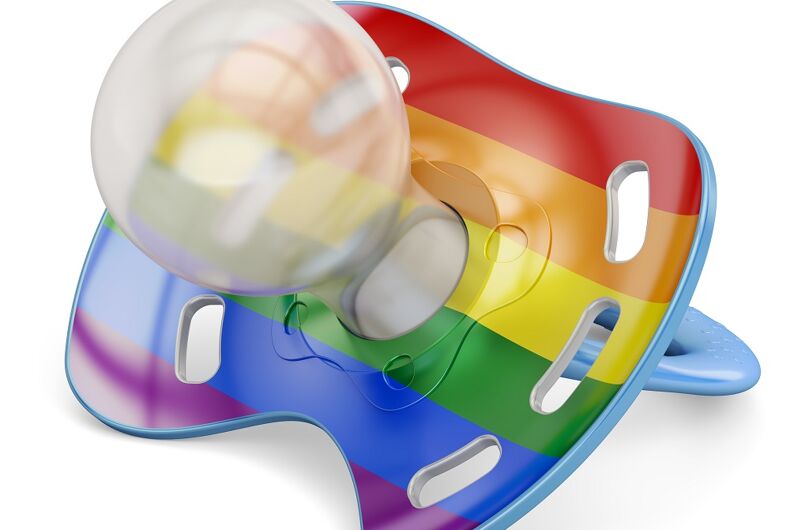 A recent Gallup Poll found that 50% of Americans believe that being gay or lesbian is “something a person is born with.”

There isn’t a scientific consensus on the origins of sexual orientation, so the fact that almost everyone in the U.S. has an opinion on it is pretty strange.

Rather, it would be strange… if people took the question as a scientific one and answered based on their unbiased judgment of current research. If they did, it would be surprising that so few people believe sexuality is set by factors in the womb, which are both innate and environmental (the womb is an environment).

Looking at results for these questions going back to 1996, the percentages answering “born that way” and supporting marriage equality have a very high correlation.

This chart shows the answers to both questions, which stayed close to each other until 2010. After that, support for marriage equality grew a little faster than people saying that homosexuality is innate.

The red line is the best fit line, and it has a positive slope of 1.65. That means that every 1% increase in people saying sexuality is innate is correlated with a 1.65% increase in support for marriage equality.

Now, correlation isn’t causation. There isn’t evidence that people’s belief that people are born gay (the Gallup question just refers to gays and lesbians) made them support marriage equality.

The causation could be the other way around – people base their beliefs on the origins of sexuality on their position on marriage equality, as a way to justify it after the fact.

Or they might both be proxies for how much someone likes gay people.

Saying that homosexuality is innate can only be understood in the context of a culture that spends a lot of energy shaming people about their sexual desire for no reason other than the aesthetic preferences of those who have power, and a society where ideas like “innate,” “genetic,” “no one’s fault,” and “immutable” often get mixed up.

Saying homosexuality is innate could just be another way of saying that sexual orientation is an integral part of one’s identity – another axis of human diversity – not a sin or a mistake.

Pride in Pictures 1982: How kissing booths brought LGBTQ visibility to the world